The Abbott government accepts the UN's rejection of its application to remove 74,000 hectares of forest from Tasmania's World Heritage Area. 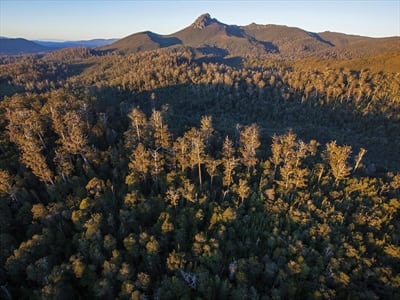 The Abbott government is disappointed by the UN’s rejection of its bid to cut Tasmania’s World Heritage Area but will abide by the ruling.

The decision was applauded by environmental groups, Labor and the Greens, who had accused the Abbott government of pursuing the delisting for ideological reasons.

Prime Minister Tony Abbott said the application to remove areas of degraded forest and plantation timber from the area was “self-evidently sensible”.

“We’re disappointed with the decision,” he told reporters in Canberra.

“We’ll be carefully looking at the decision and deciding what’s best now.”

Carbon dioxide levels over Australia rose even after COVID-19 forced global emissions down. Here’s why

Environment Minister Greg Hunt said the government had honoured an election commitment by requesting the “minor boundary modification” to the area.

“Australia accepts and will consider the decision of the World Heritage Committee,” he said in a statement.

“We believe that areas impacted by forestry compromise the integrity of the Tasmanian Wilderness World Heritage Area.”

Labor’s environment spokesman Mark Butler said the proposal should never have gone to the committee.

“Australians do not support Tony Abbott’s `dig it up, chop it down’ attitude,” he said.

Australian Greens Leader Christine Milne said the Abbott government was blind to the world heritage value of the forest.

“This is a win for common sense, the forests and people power,” Senator Milne said.

Former Greens leader Bob Brown said the request had been a diplomatic fiasco for the government.

COVID-19 has curtailed the activities of millions of people across the world and with it, greenhouse gas emissions.