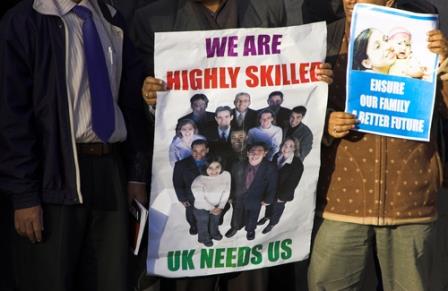 Should the United Kingdom introduce a visa points system, similar to Australia’s, for applicants from outside the European Union? UKIP says yes.

British political party UKIP, known for its anti-EU and anti-immigration – some would argue, xenophobic – principles, said one of its election promises would be to limit migrant British visas to 50,000 a year. They propose being more selective about who is granted a visa, said Steven Steven Woolfe, UKIP spokesman on migration and financial affairs. He added that the UK needs a selective and a skills-based policy’ similar to that of Commonwealth cousin Australia.

But, says Simon Walker, director general of the Institute of Directors, introducing a such a strict selections program would damage British businesses as they then face certain difficulty in procuring the talent and skill they need to grow their business in areas not serviced by the local job market.

UKIP came under further criticism, from the Adam Smith Institute. “Despite what UKIP claims, immigration is good for virtually everyone in society, rich and poor alike, said the institute’s research director, Sam Bowman.

“The evidence is clear that even low-skilled immigration only hurts low-skilled native wages temporarily, and does not affect the number of jobs available to natives at all. The reason for this is that immigrants demand services as well as supplying them. Every job taken by an immigrant also means a new job will be created to supply him or her with their needs, explained Smith.

The institute of Economic Affairs also expressed concern over the effect of such a proposed immigration clampdown’ with Philip Booth, editorial and programme director at the institute saying, “I believe that there are huge benefits from a liberal policy on immigration, as long as benefit systems are not designed to create perverse incentives.