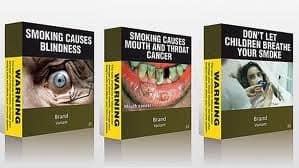 THE UK is planning to follow Australia’s example and introduce plain packaging for cigarette packets later this year says The Guardian. Proposed legislation would require all branded cigarette packaging to be replaced with identical ‘plain’ packaging carrying health warnings.

In Australia all cigarettes are sold in olive coloured cartons. Pictures of possible health effects of smoking are featured on one side and the brand name on the other. It is thought  plain packaging helps deter young smokers, who are considered the most susceptible to branding and imaging.

According to the Plain Packs Protects campaign, making tobacco packaging look less attractive can increase the effectiveness of health warnings and remove the positive association with cigarette brands and image.

The proposed legislation will also see laws introduced to prohibit people smoking in a car with anyone under the age of 16 present. The new legislation is expected to be announced in May during the Queens speech.

The move follows a recent report which suggested UK health and wellbeing was well below much of the rest of Europe, Australia and the US. The study showed tobacco accounted for 12 per cent of the disease burden, followed by high blood pressure, high body mass, physical inactivity, alcohol and poor diet.

Chief Executive of health charity Action on Smoking and Health (ASH) Deborah Arnott said the Lancet study clearly showed that smoking remains the major preventable cause of premature death in the UK and was the primary reason the UK lagged behind that of other developed countries in health outcomes.

“The government is to be congratulated for being first in Europe to commit to getting rid of the brightly coloured packs designed to attract children and young people to replace the 100,000 smokers who die each year. This is both justified by the evidence and is popular with the public,” she told Australian Times.

Ministers in the UK believe the ban on branded packaging will help reduce smoking and deter young people from initially taking up the habit. 100,000 people currently die from smoking related illness in Britain every year.

“We are going to follow what they have done in Australia. The evidence suggests it is going to deter young smokers. There is going to be legislation,” a senior Whitehall source told The Guardian.

The UK Department of Health undertook a consultation on plain packaging from March 2011 until August 2012.  Research for the department by the University of Stirling found that “plain pack colours have negative connotations, weaken attachment to brands, project a less desirable smoker identity, and expose the reality of smoking”.

Australia’s plain packaging have earned the federal government a nomination from the London Design Museum in its annual Designs of the Year awards. The packaging is nominated in the graphics category for its “anti-design”.