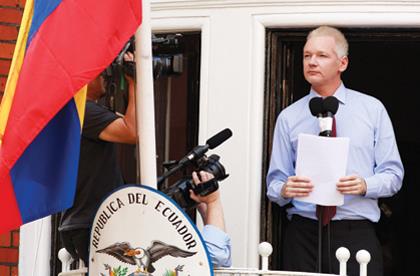 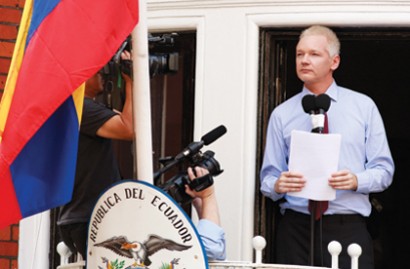 Ecuador’s Foreign Minister is travelling to the UK later this month to visit Assange, who is currently holed up in the country’s embassy in Knightsbridge, London.

Mr Patino has confirmed he will also meet with the UK government during the trip, tweeting “We hope that the meeting with Foreign Secretary William Hague brings us closer to seeing the case resolved.”

Julian Assange has resided in the Ecuadorian embassy since 19 June last year after seeking political asylum to avoid extradition to Sweden, where he is wanted for questioning in a sexual assault case.

Assange has denied the allegations, and says he fears extradition to Sweden would result in him being sent to the United States to face espionage charges in relation to his website WikiLeaks publishing of US government documents.

The documents included hundreds of thousands of secret military logs from Iraq and Afghanistan and classified State Department cables. The military trial of Bradley Manning, the US Army intelligence analyst who leaked the files to the website, began on Monday.

Mr Assange has been granted diplomatic protection from Ecuador, however would be arrested by UK police should he leave the embassy. Officers from the Metropoliton Police mount a round-the-clock guard on the building.

In February, the police said the bill for the 24-hour guard stood at almost £3m.

The Ecuador Foreign Office have issued a statement saying they look forward to the case moving forward.

“We hope the visit will contribute to our joint commitment to finding a diplomatic solution to this issue.”