Defence Minister says Canberra would welcome armed forces from the UK utilising Australian facilities much like the US is doing in Darwin. 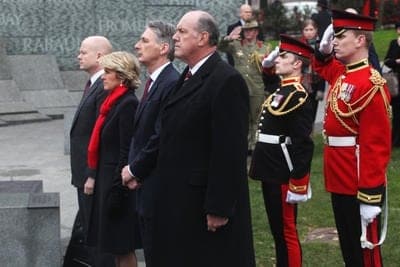 Australia has invited the UK to utilise its Defence facilities in Darwin much like the US is doing, as the allies increasingly focus on the Asia Pacific region.

Defence Minister David Johnston met with his British counterpart, Philip Hammond, and the foreign ministers of both countries in London on Tuesday for the annual AUKMIN meeting.

He was subsequently asked about the possibility of a permanent UK base in Australia.

Mr Johnston told reporters that was a decision for government but he nevertheless extended a broad invitation to British forces.

“We do have US marines coming to Darwin,” the Australian minister said.

“It will not be a basing, it’s an opportunity for them to utilise our facilities.

“(And) we welcome such a similar utilisation at every opportunity for the Royal Navy or any other of the services from the United Kingdom to come to Australia and to inter-operate with us, to train with us and to do things that are mutually beneficial.”

US President Barack Obama and the former Labor government in 2011 agreed to have up to 2500 US marines rotating through the Northern Territory by 2017.

The move is part of America’s push to re-establish itself as a major player in the Asia Pacific.

Mr Hammond on Tuesday said while the British would increasingly focus on the region a permanent base wasn’t planned – yet.

“As our focus increasingly turns to the Asia Pacific, I would expect us to send ships more regularly in future into the Pacific,” the UK defence secretary said.

“But I wouldn’t envisage at the present time basing ships in the Pacific.

“Extending visits on a more regular basis is likely to be our immediate objective.”

The four ministers on Tuesday also launched a new dialogue on Asia involving foreign policy experts from Australia and the UK.

The two governments signed a new agreement on diplomatic network co-operation that will see the Australian embassy in Baghdad move into the British embassy building to cut security costs.

“This is about identifying the synergies that make our respective diplomatic efforts more efficient and effective,” UK Foreign Secretary William Hague said.

He told reporters the UK’s unique relationship with Australia meant it was one of Britain’s “most important international partners”.

European and US leaders are focused on getting all parties talking but are also preparing for possible travel bans, asset freezes and more far-reaching economic measures.

Ms Bishop on Tuesday said: “If there is action that we believe will resolve this issue then Australia is prepared to take it.”