British minister Hugo Swire identifies five key aspects of a strong British and Australian partnership which would be beneficial to both countries. 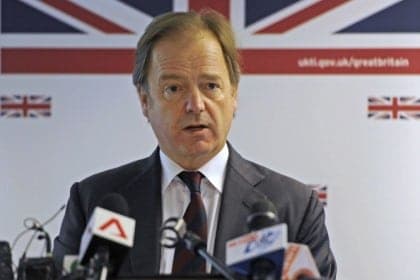 Hugo Swire, British Minister of State at Foreign and Commonwealth Office, said that Australia and Britain’s unique bond and shared strengths should be combined to insure economic growth for both countries.

Speaking in Melbourne on Monday, British MP Hugo Swire said that, outside of the EU and the USA, Australia is Britain’s most valued export market ahead of Japan, Canada and India.  Mr Swire stated in his address that UK exports to Australia exceeded AUD$18 billion, adding that the UK is also Australia’s sixth biggest trading partner with Australian imports to the UK nearing AUD$10 billion a year.

“Britain is also the second largest foreign investor in Australia with AUD$500 billion in total investment stock here, second to the US but both by some distance ahead of all the rest. At the same time, we are your second largest destination for Australian outward investment,” said Swire.

Mr Swire continued that Britain’s plans to secure its economic future included expanding international trade and investment relationships and have doubled the 2012 export and import targets for 2020.

“One third of the staff in our diplomatic network across Australia’s cities are engaged in commercial and economic work in support of this ambitious goal,” said Swire.

Swire said the British Government had identified five opportunities for a successful Australian partnership. The first of these he said is, “working even more closely together on the international stage to create the conditions for sustainable growth,” which includes further trade liberation in the G20, which he said was key to growth.

Swire said that secondly the UK and Australia should capitalise on the two countries’ joint membership of the Commonwealth.

“As members of the Commonwealth, we have a ready-made network that boosts trade and business – the engines that drive our growth. And it connects us to some of the powerhouses of the global economy. Last year, the Commonwealth’s nominal GDP was £6 trillion, according to the IMF. It is forecast to grow to £8.4 trillion by 2019.”

Swire identified the third opportunity for a UK and Australian partnership should be to increase the flow of bilateral investment and exports, in both directions.

“There have already been some striking examples of new business ties in recent years. As a father to two teenage daughters, I am all too aware of Westfield’s success establishing two of the largest shopping centres in Europe in London. We also count Australian Super funds as significant players in the UK’s transport infrastructure and utilities.”

He said that British companies were making huge investments in Australia which included energy giants like: “The BG Group with its $2.55 billion coal-seam gas project in Queensland, to Spec Savers, which has taken a 35 percent market share in just five years.”

The fourth opportunity from a UK and Australia partnership, Swire believes, is in working together in building an infrastructure that would support future economic success.

“UK companies have the experience, expertise and drive for innovation to help realise these ambitious plans. They are world leaders in low carbon and sustainable building, globally recognised for city planning and urban regeneration, and pioneers of cutting edge technology like digital Building Information Modelling.”

Swire’s said the fifth opportunity was that combined efforts by the Australian and British companies in targeting Asian markets would be beneficial to both countries. He added that Australia and the UK’s should combine their strengths in providing the services that Asia’s growing middle classes will be increasingly demanding.