Troops off to Iraq to protect Aussie staff

Tony Abbott warns that nobody should underestimate the threat posed by terrorists bearing down on the Iraqi capital as it is revealed that a small contingent of Australian troops have already been sent to 'bolster security' at the embassy there. 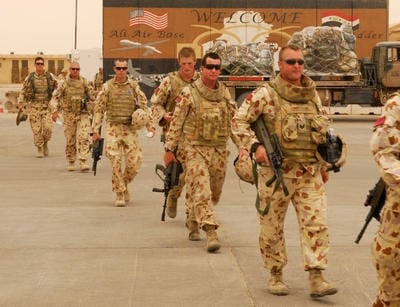 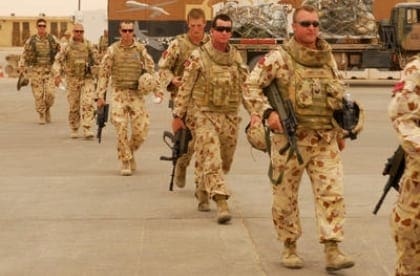 Australia has sent soldiers to protect embassy staff in Baghdad as Prime Minister Tony Abbott warns that nobody should underestimate the threat posed by terrorists bearing down on the Iraqi capital.

Defence on Friday confirmed a small unit of Australian Defence Force personnel had been sent to Baghdad to bolster security at the embassy, where a skeleton staff of diplomats remains.

The situation in Iraq has deteriorated significantly since jihadists from the Islamic State of Iraq and the Levant (ISIL) routed government forces from two major cities a week ago.

Up to 100 Australians are believed to have left the country to fight alongside jihadists in Iraq and Syria – including with ISIL – and some have been accused of committing atrocities.

In his strongest warning yet, Mr Abbott vowed that “murderous potential terrorists” trying to return to Australia would be locked up to protect the community.

“These people should have no place in our country, and we will do our best to keep them out,” he told reporters in Sydney on Friday.

“If they can’t be kept out, they will be taken into detention because we are not going to allow people who are an obvious threat to our safety and security to roam loose in Australia.”

Australia has not received calls for assistance from the United States or other parties, but Mr Abbott said if any such request was made, it would be taken seriously.

For now the safety of Australia’s remaining diplomatic personnel in Baghdad remained a top priority, as ISIL – also known as ISIS – militants continue their push south towards the capital.

Australia began withdrawing its officials from the strife-torn country this week, leaving an “essential core” of embassy staff in place.

The federal government has warned there is little they can do to assist those Australians in Iraq, estimated at possibly more than 2000.

The terrorist group stunned the world last week when it seized the major Iraqi cities of Mosul and Tikrit in a lightning offensive, sending government forces and civilians fleeing for safety.

“Given the unstable security situation in Iraq, this is an appropriate course of action to take,” he said in a statement.