Toyota's decision to follow Holden and Ford out of car-making in Australia by the end of 2017 will change the face of the nation's industry forever, the federal government says. 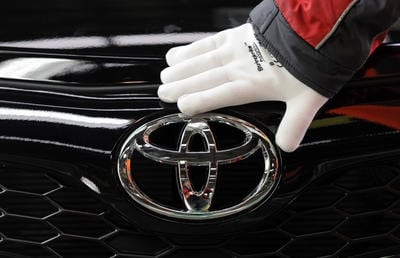 Toyota, Australia’s last remaining car manufacturer, has announced it will cease production in 2017. While 2,500 jobs will be lost at Toyota, a further 30,000 jobs in the car components industry are also under major threat as a result.

Toyota president Akio Toyoda said in a statement handed out to factory workers in Altona: “We believed that we should continue producing vehicles in Australia, and Toyota and its workforce here made every effort.

“However, various negative factors such as an extremely competitive market and a strong Australian dollar, together with forecasts of a reduction in the total scale of vehicle production in Australia, have forced us to make this painful decision.”

Toyota’s decision to follow Holden and Ford out of car-making in Australia by the end of 2017 will change the face of the nation’s industry forever, the federal government says.

But Mr Abbott tried to be upbeat about the future for the car maker’s 2500 Australian manufacturing workers, saying he was focused on making the economy stronger to create new jobs.

“Nothing that I say can limit the impact of this devastation and disappointment today (but) there will be better days in the future,” he told reporters in Canberra.

“While some jobs end, other jobs start.”

“We are looking at a potential recession all along the south-eastern seaboard,” the union’s vehicle secretary Dave Smith.

“The magnitude of this decision in the community cannot be underestimated.”

The Australian Industry Group believes Toyota’s decision is a sad but inevitable consequence of being the last major auto maker in the country.

“Toyota went through a rigorous process and worked extremely hard to identify ways to maintain its manufacturing operations in Australia but it was clearly untenable,” Ai Group boss Innes Willox said.

However, Opposition Leader Bill Shorten and unions placed responsibility for the closure squarely at the government’s feet.

“The Abbott government’s only been in for five months, and in that time we’ve seen the death of the Australian car industry,” Mr Shorten said.

The ACTU said Toyota’s decision was a sign Mr Abbott had failed to stand up for local jobs.

“The Abbott government goaded Holden into leaving. They’ve done absolutely nothing to keep Toyota in this country and as a result Australia will lose up to 50,000 direct skilled jobs, $21 billion will be wiped from the economy and regions will go into recession,” ACTU secretary Dave Oliver said.

“But Tony Abbott was the final nail in the auto industry’s coffin,” he said.

Mr Brandt wants the government to call an emergency roundtable meeting to secure a future for auto-parts manufacturers, while insisting Australia establish a long-term plan and targets for electric vehicles.

The Victorian government was quick to move in support of workers impacted by Toyota’s decision, not only those directly employed by the company, but others in the supply chain.

The Federation of Automotive Product Manufacturers president Jim Griffin says as many as 28,000 people work in the supply sector.

“Today is another terrible day and it ups the ante because we are looking at the demise of the complete industry and the network behind it,” he said.

“There is a manufacturing future but it will be a different future.” – with AAP