Tony Abbott says he should not have winked

The prime minister says he winked because he became momentarily distracted while taking a call during an ABC radio interview. 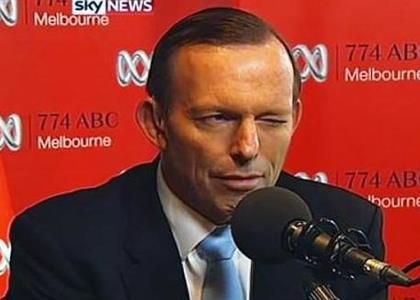 Prime Minister Tony Abbott says he shouldn’t have winked while listening to a radio talkback call from a woman who told him she had to work on a phone sex line to make ends meet.

Mr Abbott said the wink was directed at the host of the ABC radio program and was not meant to be disparaging of the caller, “Gloria”, who described herself as a 67-year-old chronically ill pensioner in tough financial circumstances.

The incident sparked an immediate backlash and Mr Abbott was pilloried on social media and by fellow politicians because it appeared he had winked and smiled as Gloria told him what she did to help pay the bills.

Mr Abbott said he was looking at the host – the ABC’s Jon Faine – and was winking his assent to take the call.

“I shouldn’t have done it … I should have been more focused on the caller and less focused on the interviewer,” Mr Abbott told the Nine Network said on Thursday.

Asked if he was being disparaging towards the woman, Mr Abbott said he was attempting to engage with the caller.

“Mistakes are always regrettable … and I will do my best having made a mistake yesterday to make none today,” he said.

Gloria had taken Mr Abbott to task over changes to pension arrangements and the planned introduction of a $7 GP co-payment in last week’s budget.

“I just survive on around $400 a fortnight after I pay my rent,” she told Mr Abbott.

“I work on an adult sex line to make ends meet. Now that’s the only way I can do it.”

Mr Abbott’s faux pas, which was caught on camera, comes as he faces a collapse in his personal approval rating.

The coalition is suffering in the opinion polls in the wake of the budget, with Labor having opened a 10-point lead on a two-party preferred basis at 55 per cent to 45 per cent.

But the prime minister rejected any speculation nervous coalition MPs could seek to replace him ahead of the next election if support continued to wane.

“I think what we need in this country right now is not an action replay of the last six years,” he said.

Foreign Minister Julie Bishop, the only woman in Mr Abbott’s cabinet, said there was nothing sexist in the prime minister’s wink which was intended as a go-ahead signal for the call.

“I think people are far to quick to judge others through this prism of everything being about misogyny or sexism,” she told ABC radio.

Ms Bishop said she was always treated with respect by Mr Abbott and her male colleagues in cabinet.

“Believe me, I’ve worked in some sexist environments and this isn’t one of them,” she said.

ut Gloria, who admits that is not her real name, has now labelled the prime minister “stupid”.

Speaking to Red Symons on the ABC on Thursday morning, Gloria said she was glad the “winkcident” had received so much coverage because it had shone a light on the issues she was raising in relation to the budget’s impact on Australians battling to pay the bills.

“He’s pretty silly, because if he hadn’t done that I’m sure what I said would have been forgotten by now,” she said.

Gloria rejected Symons’ description of the incident as “a curious thing”.

“Curious is not the word … sleazy, slimy …,” she said, before adding she thought the prime minister was “a stupid man”.

“I’ve been seething for weeks about Abbott and Hockey and yesterday was a real opportunity to vent – which I didn’t think I’d ever get,” she said.

Despite the attention generated by Wednesday’s interaction with the prime minister, Gloria’s sex line phone wasn’t running hot on the night.

“It didn’t improve my call rate last night – I only got one call and it only lasted for four minutes,” she said, adding that at 50 cents a minute, her bottom line had improved by just $2.

The wink shows how out of touch the prime minister is, Opposition Leader Bill Shorten said.

“I’m sure the prime minister’s minders would’ve had a collective forehead-slapping moment, and said, ‘oh my goodness Tony’s at it again’,” Mr Shorten told reporters in Melbourne on Thursday.

“I don’t know what was going through his mind then.

“It just shows how out of touch the prime minister is.

The Greens have called on Abbott to step down from his position as the government’s minister for women.

“We need a minister for women who is actually a woman and who is prepared to stand up for women – not simply dismiss their problems with a wink and a smirk,” Greens Senator Larissa Waters said in a statement.