Australia's prime minister has laid a wreath at the National September 11 Memorial in New York City. 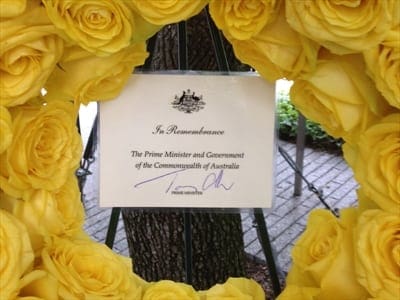 Prime Minister Tony Abbott has honoured the memory of Australians who died in the September 11 terrorist attacks with a visit to the memorial in New York.

Ten Australians were among the 2983 victims of the attacks.

The wreath was placed at the foot of the “survivor tree” – a Callery pear tree found in the ruins of the World Trade Centre towers and replanted.

The names of every person who died in the 2001 attacks and 1993 bombing of the World Trade Centre are inscribed into bronze panels edging the 4000 square metre memorial pools.

Mr Abbott inspected the plaques of all 10 Aussie victims.

About 13 million people have visited the memorial since it opened at the original WTC site in 2011.

The memorial features in its centre the largest man-made waterfalls in North America.

Mr Abbott will ring the bell to start the market day at the New York Stock Exchange.

He also has a number of meetings in the Big Apple, including one with UN Secretary-General Ban Ki-moon.

“This is an extremely sombre place,” Mr Abbott told reporters.

“It’s really quite overwhelming to be in this place on the spot where some 2900 people were killed, including 10 Australians, in one of the most horrific events in world history.”