The US has received a crash course in Prime Minister Tony Abbott's missteps and controversial comments, thanks to TV show Last Week Tonight. 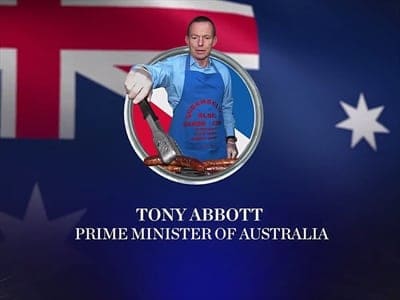 It was not the glowing introduction a new Australian prime minister on the eve of his first visit to the White House would have likely preferred.

A US political satire TV show has taken aim at Tony Abbott, airing a four-minute segment featuring some of his most embarrassing and controversial moments.

“Did you know there are other countries that are not America and each of them has a leader of its very own?” the segment on HBO’s Last Week Tonight with John Oliver asked.

“Let’s take a moment to meet one.”

Did US viewers see the infamous Winkgate moment? Yes.

His “s*** happens” comment while discussing a Queensland soldier killed in Afghanistan? Yes.

His “housewives of Australia need to understand as they do the ironing” remark? Yes.

Viewers even saw a shirtless Abbott on the beach in his budgie smugglers.

Abbott was described on the show as a “hard-line right wing prime minister” who “rose to power promising to be pro-business and religiously anti-immigration”.

The show then noted Abbott was born in England.

“What is it about Tony Dumb Dumb that has led to his current approval rating of 30 per cent?” the show asked its viewers.

“Could it be that he has personally insulted everyone else in the country from women, to gays, to anyone remotely Irish, to elderly cancer-ridden phone sex workers?”

The segment comes as Abbott embarks on a tour to Europe, Canada and the US, with a stop at the White House to meet Obama.

Oliver is no stranger to Australia, winning an Emmy last year for a segment he did on another US political-comedy show, The Daily Show with Jon Stewart, about Australia’s successful implementation of gun laws.