Prime Minister Tony Abbott and US President Barack Obama have discussed climate change and energy efficiency in their talks at the White House. 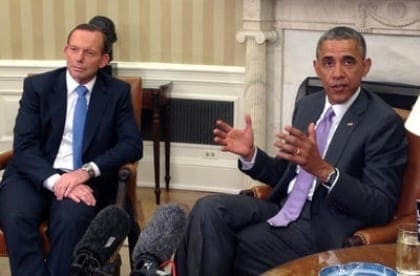 US President Barack Obama has offered an olive branch to Prime Minister Tony Abbott on climate change, conceding that he won a mandate in 2013 to get rid of the carbon tax.

But Mr Obama, who discussed climate change with Mr Abbott at the White House on Thursday, urged Australia and other nations to adopt “ambitious domestic climate policies as the basis of a strong international response”.

The two leaders agreed climate change would be an issue for discussion at the G20 leaders’ summit in Brisbane, under the topic of “energy efficiency” and cleaning up the most polluting power plants.

Mr Obama mentioned the carbon tax, acknowledging that the Abbott government had a clear electoral mandate for a different approach.

Mr Abbott told the president he was committed to delivering Australia’s bipartisan target of cutting emissions by five per cent by 2020 by spending $2.5 billion on his direct action plan.

He later told the Nine Network that by 2020 Australia would have an “overall reduction of some 20 per cent in our emissions off a business-as-usual model”.

Earlier in his trip to Canada and the US, Mr Abbott described climate change as a significant issue but not the most important issue facing the world.

US media have been repeating an old quote in which he says that climate change is “absolute crap”.

Last week, Mr Obama announced a plan to cut carbon emissions from power plants by 30 per cent by 2030, giving the states free rein to choose whether to do it by carbon pricing or other means.

The discussion between the two leaders was described as “straightforward”.

Mr Abbott also mentioned to the president that his government’s reinstatement of fuel excise indexation would also have an effect on emissions.

US officials have described climate change as a “creeping national security crisis” because of its potential to breed conflict, migration and natural disasters.

The G20’s energy sustainability working group, which is looking at issues around environmental impacts, has held two meetings so far and plans another in August before the leaders’ summit.