Labor MPs will vote in a ballot for the Labor leadership at 7.00pm AEST (10am UK time) for either Julia Gillard or Kevin Rudd to be prime minister. As the vote comes to a head, we look back at a timeline of Labor leadership thrills, spills and challenges. 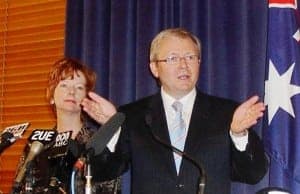 Where it all began. Kevin Rudd is elected as leader of the Labor Party in December 2006, with Julia Gillard elected as his Deputy Leader.

Following the resignation of Mark Latham as the leader of the Labor Party in January 2005, Kevin Rudd is mooted as a possible candidate. However he does not contest the leadership and Kim Beazley is elected unopposed.

In November 2006 opinion polls show support for Kevin Rudd is higher than for Beazley as Labor leader, and speculation begins to mount that Rudd would challenge for the leadership. Beazley calls a leadership election on 2 December and Rudd announces he will run. He wins the ballot with 49 votes to Beazley’s 39, and Julia Gillard is elected unopposed as Deputy Leader of the Labor Party.

A Newspoll released on 21 June, 2010 reveals Labor hitting a record low of 35% compared with the Coalition’s 40%. Rudd’s personal approval rating sits at 46%.

Julia Gillard is convinced by members of the Labor Party to challenge Rudd to the leadership on 23 June. Rudd announces a ballot for the following morning, in which he then does not stand. Gillard is elected leader of the Labor Party unopposed and becomes the first female prime minister of Australia.

Immediately after the spill, Ms Gillard says she took over from Mr Rudd because she felt “a good Government was losing its way”.

The following election in August results in a hung Parliament. Gillard negotiates to form government with the Greens and independents.

Kevin Rudd resigns as foreign minister on 22 February 2012, saying he doesn’t have confidence in the PM. Two days later on 24 February he challenges Gillard for the leadership, saying he will call for a spill on Monday.

On 27 February Gillard defeats Kevin Rudd and maintains leadership of the ALP, 71 votes to 31 votes. Rudd promises to dedicate himself to “working fully” for Ms Gillard’s re-election.

Leadership tensions again escalate on 21 March as Simon Crean calls for Gillard to hold a leadership spill and for Rudd to contest for leadership.

Gillard calls a ballot for 4.30pm. Kevin Rudd announces at 4.20pm he will not be standing in the leadership ballot. No one else stands for the position of leader of the Labor Party and Gillard wins the ballot.

Rudd says: “The only circumstances under which I would consider a return to leadership would be if there was an overwhelming majority of the parliamentary party requesting such a return, drafting me to return and the position was vacant,” he said.

After a fervent week of leadership speculation, and in the last sitting week of Parliament before the election, supporters of Rudd circulate a petition to force the matter to a vote.

Julia Gillard announces leadership ballot will be called at 7pm to decide the matter once and for all. Rudd has confirmed he will stand against her. Both Gillard and Rudd agree the loser of the ballot will quit politics.