Ticking all the boxes: voting as an expat at Australia House

ELECTION 13 | Voting for the people that represent you in parliament is a big responsibility, even when you are living away from home. Australian Times went down to Australia House in London - the biggest polling booth in this year's federal election - to see what all the fuss is about. 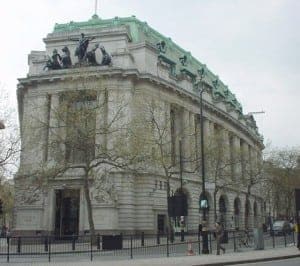 IT is every Australians responsibility – nay, it is their civic duty – to vote for the individuals that will represent them in government. While living in London, that duty becomes diluted. After all, what does it matter how the election turns out? All politicians are cut from the same cloth, and if you’re here in the UK for more than two years it probably won’t have too much of an impact on your day-to-day life at all. This is where you are wrong, my fellow citizens. What happens in the Australian election this year will affect us all, and its up to you to contribute to this defining, crucial decision.

Pre-polling opened at Australia House in London yesterday, so I headed down today to see what it was all about. To be honest, my conversations with the Australians in my social circle did not engender confidence in the democratic process. Most didn’t intend to vote, some didn’t think that they were able to and one confessed that he had never registered to vote in the first place. That is why I scoffed when I was warned about the crowds at Australia House. You have got to be joking, I thought. If my unrepresentative survey was anything to go by, going to vote in London would be like walking into a ghost town.

Not so. As I strolled down the road from Holborn station, I could see the gathering crowd that snaked around Australia House. I am a bit of a political junkie and have volunteered on many election campaigns in Australia. The scenes I witnessed at Australia House was not unlike those that you would see at home, where people are compelled to vote under threat of a fine. I accepted how-to-vote flyers from representatives of all the major (and a few minor) political parties and assumed my position in a queue that I was told would take half an hour. Half an hour! Can you believe it? Half an hour out of my beautiful, sunny London day just to exercise the democratic right that gives us the ability to call ourselves ‘the Lucky Country’. The nerve of it!

The half hour flew by, however. You see, no matter our political differences, Australians are a friendly group of people. We are bonded through simple virtue of being from the land Down Under. Everyone in the line managed to find someone to chat to, most of them people that they had never met before turning up to the ballot box. I spent my waiting time talking to Courtney, a teacher from Bateman’s Bay who had just settled in to a her new home in Wimbledon. I’d never seen this girl before, and yet for thirty minutes we chatted like old friends about a range of things, from skiing holidays to the cheapest places to go for a drink in London.

Before we knew it, we were at the head of the line and it seemed like no time had passed whatsoever. The process from there could be quite intimidating: unlike in Australia – where you run in and out of the voting booth within five minutes – voting at Australia House requires a swift security search before entering the building. You are then given forms to fill out with all of your details, to make sure that your vote is sent to the right place for counting. Considering the fact that there are well over 100 electorates thoughout the country, you can imagine that electoral workers at Australia House have quite a job ahead of them to even determine what ballot papers that you are supposed to fill out.

While the system seems complex at first glance, credit goes to the people working on the election at Australia House. They have a tougher job than anyone in a similar position at home, with many different variables to determine before a ballot paper is handed out. They perform their duties admirably, with a process as swift and painless as one could expect given the circumstances. Before I knew it, I had filled out my forms and popped them in the box labelled ‘Queensland’. Of course, I won’t be telling you who I voted for – the secret ballot is an Australian invention after all!

The best part about voting at Australia House is that it is that it is only a short walk to the Walkabout at Temple for a quick bite and a pint afterwards. You could see the Australians – expat and tourist alike – that convened at the Walkabout en route to and from Australia House. For once, the chatter in the humble Walkie wasn’t about the football – it was, astonishingly, political. A group of older Australians on holiday in the UK inquired about how to get to Australia House to vote. The barmaid told them, under the proviso that they voted for “anyone except Abbott”. That attracted a few light-hearted comments from the older patrons, while further banter about next month’s election coming thick and fast.

We are proud to travel around the world and claim our nationality. When people ask if we are from the UK, you can’t deny having a bit of pride when you say “Nah, Australia mate”. Which begs the question: do you really have the right to be say that when you can’t take the time to vote for the people that lead your country? The process is simple, the people working at Australia House make the voting experience easy. Hell, it even has an Aussie bar right down the road to take advantage of afterwards. Get down to the Strand in the next few weeks and have your say. You may live overseas, but your opinion? It still matters.