The magic of the medieval in Obidos, Portugal

Far from the vibrant nightlight and lazy days of Lagos, ERIN SOMERVILLE experiences the true heart of Portugal with a Medieval Market in cobblestoned Obidos.

by Erin Somerville
in News

I’VE never looked good in green, but this was just ridiculous. I squeezed amongst the small colourful petals of people who were blossoming from one of the room’s only mirrors to get a two-second glance at myself. Yep, it was official. I looked like Maid freaking Marian.

I never intended on spending my Friday night in the year 1450AD. I should have been down in Lagos a week ago, but somehow the hospitality of a local Portugese lady’s homely hostel, and the slow pace of rural life in quaint Obidos grabbed hold of my wandering heart and wouldn’t let go. Well, at least not until I had experienced the Obidos Medieval Market.

Admittedly, I had my doubts about a medieval fair.  I handed over my deposit for the costume and entry fee, and wandered sheepishly in my felt gown through the town’s cobbled streets and up to the big wooden gate that would take me back in time. As I handed over my ticket and stepped through to the other side of the grand Obidos hill that was now succumbing to the late afternoon shadows under the massive town wall, I knew immediately I was in for a treat. This definitely was not the tacky fair I had envisaged.

I made a beeline down the dusty trail to the heart of the action, with camels, peasants, nobles and knights competing with the grand country valley views for my eyes’ attention. As I stepped into the throng of medieval life and browsed its buzzing stalls and taverns, I suddenly realised it was my nose that had copped the real surprise. The medieval caste system had obviously been thrown aside for this festival; we would all be eating like royalty tonight.

The challenge began when deciding which charred carnivorous dish to gorge myself on. It was impossible to say no to the generous meat-laden espetadas (Portuguese for best kebabs ever) being slowly roasted over coals when trying to save room for the mouth-watering  giant hog on the spit, or to pass on the fresh bread that was whipped up on the spot and served straight from a traditional oven.

Women with flowers in their hair were stirring through piping-hot pots and pans of delicious traditional sweets, such as arroz doce (rice puddings), pastries, and biscuits, which infuse a home-cooked quality I hadn’t tasted since my grandma’s  2011 Christmas dinner. I stopped in for a Bock at one of the many open-air wooden taverns and guiltily nibbled on my third biscoito, while I guessed what skinned animal would be thrown on the coals next. If this was how the medieval people actually lived, they never would have changed a thing. 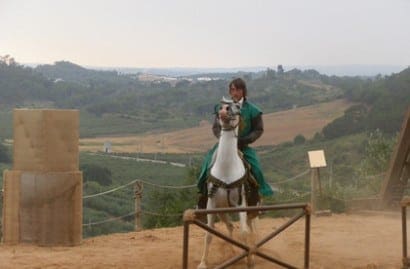 Amongst the medieval action

Just as I thought I’d had my fill of all things medieval, I realised I hadn’t fully digested the medieval action. The site had been frantic all evening with the practised movements of the  blacksmiths, chefs, mule drivers, jesters, leather merchants, woodchoppers, and young knights testing their sword fighting and beheading skills, but it all began  to slow down as the noise of an oncoming  procession took over the hillside.

The crowd instantly milled around the main passageway as musicians, belly dancers, camels, and knights all passed through on their way to the grand event of the night. I should have known that my time in a medieval market would not have been complete until grown men jumped on horses and tried to hit each other with sticks.

Joining in the Joust

As easy as it is to be a little hesitant at a jousting tournament in the 21st century, I couldn’t help but get caught up in the atmosphere as I knocked little noble children out of the way to get a ringside seat for the action. As the handsome actors in shining armour from the Os Cavaleiros do Tempo (Oscavaleirosdotempo.eu) galloped out on their beautiful and well-trained steeds, the child in me was crying out to see the evil knights knocked off their horses, and to die a bloody death in the sword fighting that followed. The gasps of the children layered with the dramatic music wove its way into the mauve evening light and hung over the countryside. It was hard for even the smallest imagination to not to get swept up in the magic of the moment.

The darkness was setting in as I took my noble self back to the future and reluctantly stepped through the time capsule at the wooden medieval gate. I handed over my felt green gown with a sense of awareness that I had just experienced one of those rare opportunities to spoil my inner child in a way I hadn’t  done in years, and in a way I probably wouldn’t do again in a very long time.

For a home away from home stay at the comfortable Guesthouse Argonauta, Rua Adelaide Ribeirete 14, Obidos, Portugal

While in Obidos, rent out a bike and check  out the medieval castle, the roman ruins, the beaches, the countryside , the vineyards, and the Obidos Lagoon.

If can’t make the Medieval Fair, you can get a taste of the sweet life at the Obidos International Chocolate Festival in March.