The forgotten women rebels of Eureka

Prize winning author Clare Wright tells us about her new book, revealing the vital role of women in the Eureka Rebellion as they helped pave the way for democracy in Australia.

by Emily Banyard
in News 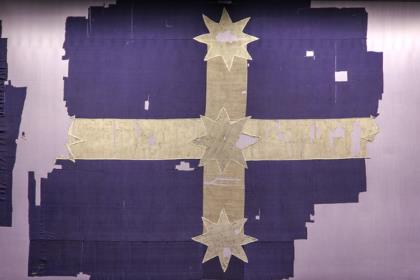 Internationally renowned historian Clare Wright has spent her career writing women back into our history pages – now she turns her attention to a key event in Australian history and the pivotal role that women played.

In her latest book, The Forgotten Rebels of Eureka, Wright tells the uncut story of the day the Australian people found their voice. There were thousands of women on the goldfields and many of them were active in key roles. The stories of how they arrived there, why they came and how they sustained themselves make for fascinating reading in their own right. But it is in the rebellion itself that the unbiddable women of Ballarat come into their own.

I caught up with the 2014 Stella Prize winning writer to find out more about her work:

Do you remember what got you interested in history?

I fell in love with History in Year 12. That was the first time in my schooling that I had the opportunity to do an independent research assignment.  I spent my two-week Spring break buried in the dark bowels of the State Library of Victoria, poring over old newspapers, maps, diaries and letters.  Once I’d breathed the dust of the past into my lungs, I was hooked.  I am still happiest when I’m chasing down a question through the archives.  Historical research is a kind of pleasurably compulsive but also slightly masochistic detective work: asking questions, seeking answers, only to find more questions.  It’s hard to know when to stop.  And there’s no black and white – only endless shades of grey.  That’s why it took me ten years to research this book!

How do you feel Australian historians fit in on a world-scale?

There are many Australian historians who are better known to readers outside of Australia, particularly scholars of European History and Transnational.  They are eminent in their fields of expertise and have contributed widely to the scholarship and theory of the discipline.  But I think that scholars of Australian history are probably less read than they deserve to be.  Australians tend to be an enquiring and self-critical mob but have a short amount of white colonial and national history to dissect.  So we pour over our stories and can be really great storytellers.

Do you feel female historians are forcing readers to rethink history?

I don’t think that female historians are necessarily game-changers by dint of gender, but historians who foreground women in the conceptual re-imagining and narrative structure of the story certainly encourage readers to think again about events, characters and themes that they thought they knew so well.  As I write in my book, adding women to the picture doesn’t just add colour, it changes the very outline.  We are forced to think again about who it is that actually makes history (the default position is that men are agents of change), what significance a particular event actually has, and for whom, and why.  More questions! And because these are new questions to be addressed, it means you can go back into the same archives that have been used by previous historians, and find different answers.  A more socially inclusive approach to writing history gives us a much richer – and I would argue – more authentic version of the past.

Eureka is one of those key foundation stories that is told time and again in Australia. It is the moment when miners stood up against an oppressive regime and claimed their rights and freedoms.  Eureka is branded as ‘the birthplace of Australian democracy’.  Every school child learns about it, often at several different points in their education.  But the story has always been told as if only men were part of the landscape (the gold rush frontier), as if only male concerns were cause for the rebellion (political disenfranchisement) and as if only masculine values can be attributed to the legend (independence, autonomy, mateship).  I wanted to ask the question that never occurred to me as a school girl: where am I in this story?  I wanted to know whether the story that had been passed down was truth or legend.  And that meant returning to the primary sources and looking for traces of women.  Well, I didn’t have to look hard or far.  They were everywhere!

Where do you think Eureka sits in the Australian historical imagination? Why is it important for British to know about it?

See above re: Australian historical imagination.  I think British readers will be as interested in this story as Australians are because, after all, the majority of the people who were engaged in these mass popular protests for democratic change were recent immigrants from Great Britain.  White people didn’t just pop up on Australia’s shores like mushrooms after a rain.  They sailed here, under incredibly difficult circumstances, as refugees from the constraints and deprivations of the Old World.  Labourers fled serfdom.  Gentlemen and women escaped from restrictive social conditions and mores.  Many were political visionaries – Chartists, Bloomerists – who looked for fertile new soil in which to plant their reform agendas.  They all contributed to a second wave of dispossession of the original indigenous inhabitants.  This is a British story too.  It’s what happened at the tail-end of the European revolutions of 1848.  I don’t know whether it’s important to know the result of that particularly tumultuous era in British history, but it’s certainly fascinating!

What do you think are the most important Australian historical events that should be studied in every Australian classroom, and why?

The frontier wars between Aboriginal Australia and the European invaders.  Our first people fought a bloody and murderous war for control and sovereignty of their lands.  We need to know and reconcile this fact.

The first experience of massive multi-cultural immigration, a feature that would continue to shape our nation.

The passing of the 1902 legislation that made Australia’s white women the most fully enfranchised in the world.  We were the first to enjoy full political equality with men; that is, the right to vote and to stand for parliament (New Zealand women didn’t get the second right until 1919).

Your first book was Beyond the Ladies Lounge: Australian Female Publicans, do you feel there is a different relationship between Aussie women specifically and alcohol compared to other countries and why this topic?

When I was an undergrad, I became interested in cultural drinking practices and the way they revolved around gender.  Aussie men do a lot of male bonding around alcohol consumption (I suspect it’s similar in other western nations) and historically, the pub was seen as an exclusively male domain: ‘no place for a woman’. But popular wisdom and anecdote held that formidable women were the backbone of pub life.  Which was true?  I tested the stereotype of male ascendance through the use of both oral history accounts of women who’d run and worked in and drunk in pubs, as well as the documentary sources, to compile a strong evidence-based case for the fact that women dominated the hotel industry in the 19th and early 20th centuries – as proprietors and distributors, if not as patrons.  That makes the whole endeavour sound very dry, but actually the book is a hoot because it’s peopled with such indomitable, spirited women and stories.  It’s history written from inside the pub; it takes you right up to the bar and introduces you to the woman running it.  I like to write history that reaches out and grabs the reader where it counts: on the level of emotion, curiosity and empathy.

Are you working on a new book and what will it be about?

Well, I’m working on a Young Adult version of The Forgotten Rebels of Eureka as well as a re-release of Beyond the Ladies Lounge, ten years after its original publication.  I’ve also just finished co-writing a landmark four-part television documentary series for the ABC to commemorate the centenary of World War 1.  It’s called The War That Changed Us.  And I’m working with a media production company to produce a very exciting new immersive digital media project that puts the user right back in the trenches and casualty clearing stations of the Western Front in 1916.  It’s an incredible melding of historical scholarship and cutting-edge technology.  But I’m soon to start research on my next book, which will be a new history of mining in Australia.  Another huge project, but I’ve promised my publishers it won’t take another decade to achieve.

Finally, who is your favourite historian and why?

I don’t have one, so can I name a few?  Geoffrey Blainey, not for his world view, but for his clear, elegant and accessible writing.  Michael Cathcart for his sheer exuberance and making history fun.  Simon Schama for taking history to the people.  Barbara Tuchman for her eagle-eye for detail.  Greg Dening for teaching me that human emotion is to be embraced, not feared.  Marilyn Lake for her searing intellect. Anne Summers, Simon Winchester, Geraldine Brooks (ok, she’s a novelist but she writes amazing historical characters). 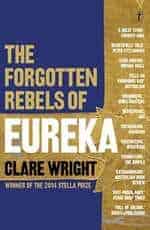 ‘The Forgotten Rebels of Eureka’ by Clare Wright is published by Text Publishing, Paperback Original, £16.99 and available on Amazon.