The Australian’s reputation up in smoke over cigarette plain packaging

SPECIAL REPORT | Rupert Murdoch’s ‘The Australian’ has been accused of conspiring with Big Tobacco to dissuade the UK and Ireland from introducing plain packaging legislation, with an apparently ‘misleading’ report claiming Australia’s landmark laws are failing. 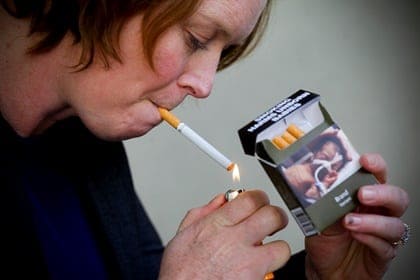 We recently reported on an article published in The Australian which claimed that Australia’s tough new laws enforcing plain packaging of tobacco products had done nothing to deter sales but had actually increased sales. The ‘exclusive’ report by News Corp’s Aussie flagship has since been exposed as untrue, leading experts to question the motives behind the story.

The Rupert Murdoch-owned newspaper The Australian this month published a series of articles aggressively mocking and challenging the effectiveness of the cigarette plain packing legislation. The paper went so far as to say (perhaps unsurprisingly) that Labor, who introduced the initiative over a year ago, are: “kids who haven’t done their homework.”

But critics have lined up to pour water on the paper’s ‘facts’ with some accusing it of deliberately misleading readers and global newsrooms on behalf of Big Tobacco.

The initial ‘exclusive’ story by Christian Kerr, featured on the front page of The Australian on 6 June under the headline “Labor’s plain packaging fails as cigarette sales rise” (image below), sparked considerable international interest as governments of countries such as the UK and Ireland consider similar legislation based on how effective the Australian laws prove to be. 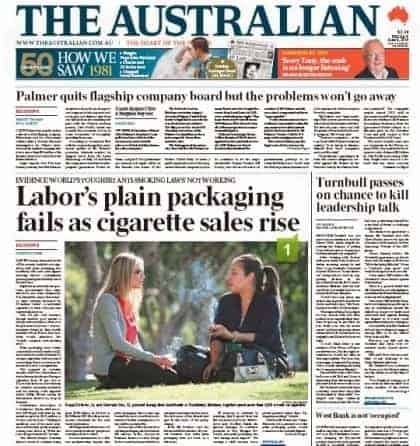 100 days without COVID-19: how New Zealand got rid of a virus that keeps spreading across the world

The Australian‘s report soon caught fire, being regurgitated by a number of the world’s leading publications and websites including The New York Times, The Telegraph UK and we reported on the story too.

“Talk about unintended consequences! The Australian plain package cigarette initiative, introduced in 2012, has backfired. Instead of curbing smoking, smoking has actually gone up …” – The Telegraph (UK).


Claims that The Australian deliberately misinformed the public

The controversial conclusions in The Australian were immediately challenged, though.

The fact is tobacco consumption is at an all-time low since tobacco sales figures were first recorded in 1959, according to respected economist and former Julia Gillard advisor Stephan Koukoulas.

In a 6 June post on his blog TheKouk.com titled “The Australian’s claim on tobacco goes up in smoke”, Koukoulas wrote: “The Australian is at it again. It is running another fact-less story with the express intent of undermining a key policy of the previous Labor government and what is disconcerting this time, is that it is pushing the line of the tobacco industry.”

Koukoulas later told The Irish Times: “The Australian said the consumption of tobacco had gone up according to confidential industry research. I’m an economist who has looked at data up and down and back and forth for many decades and I thought, That doesn’t sound right’.”

He dug a little deeper.

“So I looked at the data in The Australian Bureau of Statistics national accounts, and found the volume of tobacco consumed is falling.

“The figures show that total consumption of tobacco and cigarettes in the March quarter of 2014 is the lowest ever recorded. This is extraordinary. It is a Great Depression for tobacco sales.

“Their [The Australian] agenda on many fronts is to bash Labor . . . There is also some discussion the coalition wants to repeal the plain packaging laws, so maybe this is part of the softening up.”

The Australian reacts to the criticism

The Australian responded aggressively to Koukoulas’s accusations. On 16 June, in a sharply worded opinion piece  under the headline “Claims plain packaging works go up in smoke”, Judith Sloan wrote:

“There are at least four problems with the Kouk’s analysis. The first is that expenditure figures do not allow us to know precisely what has happened to quantity.

“And here’s the second problem – through most of 2013, total spending on cigarettes rose. Given that we know the cigarette companies were engaging in deep price discounting, we can be reasonably confident the number of cigarettes consumed rose in 2013, after the introduction of plain packaging.

“Third, while it is true expenditure on cigarettes fell in the first quarter of this year, it needs to be borne in mind that the rate of excise on cigarettes rose sharply, by 12.5 per cent, in December last year.

“Finally, we know the seasonally adjusted figures are subject to substantial revision and the March figure will almost certainly be adjusted to show a smaller decline.”

At this point, Sloan also refers to Sinclair Davidson’s analysis at catallaxyfiles.com. Sinclair Davidson is an economist at RMIT and a senior fellow at the Institute of Public Affairs (IPA) – an Australian right-wing think tank.

The IPA has reportedly received funds from the tobacco industry. British American Tobacco Australia told the Sydney Morning Herald in 2012 it was a member of the IPA.

Sloan quotes Davidson as saying: “[plain packaging legislation is a] state-sponsored persecution of that minority who consume tobacco.

“I have no doubt that the consumption of cigarettes has risen since plain packaging was introduced; we just can’t be sure whether it is by existing smokers or new smokers.”

Sloan goes on to say in her column:

“The nannies are panicking. Why hasn’t the consumption of cigarettes collapsed after the introduction of mandatory plain packaging? How can we explain this one? Like kids who haven’t done their homework, the excuses are coming thick and fast:

“So are there any reasons to doubt claims by The Australian’s Christian Kerr that tobacco sales volumes have increased by 59 million sticks since December 2012 (an increase of 0.3 per cent) and consumption of the cheapest cigarettes has risen significantly more?

Media Watch gets in on the action

“It seems like The Australian is pushing, in a high profile front page story, baseless information fed to it from pressure groups with a vested interest to sell more tobacco and cigarettes,” Paul Barry snarled in the 16 June edition of the ABC’s Media Watch.

“The Australian also quotes surveys from NSW and South Australia to back its claim that smoking is on the rise. But, in fact the figures don’t support that conclusion,” he says before citing Koukoulas and accusing Christian Kerr (the original article’s author) of also being an IPA stooge.

Barry says it’s “great news for Big Tobacco that the Australian’s claim about the laws not working has lit up the British press”, claiming it could be worth billions to Big Tobacco if it keeps plain packaging at bay in the UK and in Ireland where parliament is set to debate new plain packaging laws introduced last week.

Mike Daube, Professor of Health Policy at Curtain University and chair of the Labor government’s panel which recommended the plain packaging laws, told the programme: “Every bit of the report is dodgy, from the way it was set up, to what’s in it, to the lack of analysis.”

“The tobacco companies want stories in the UK that will say plain packaging hasn’t helped in Australia. That’s the main game for them at the moment,” Daube added.

“And how lucky they are that The Australian will play it for them,” Barry quipped, adding: “But it comes at a cost to the paper’s reputation.  Not only has The Australian allowed an IPA spear carrier to lead its front page.  It has let him (Kerr) use figures that the government says are misleading and to make claims the experts say are garbage.”

View the full Media Watch ‘Up in Smoke’ segment, below, or watch it on the ABC’s Media Watch section online, here.

In TheGuardian.com’s 18 June article “Australian Medical Association accuses The Australian of promoting smoking” Professor Ian Olver, medical oncologist and CEO of the Cancer Council, chimed in on the controversy.

Olver cited new Treasury figures which he said were a further indication of a decline in smoking, with tobacco clearances (including excise and customs duty) falling by 3.4% in 2013 relative to 2012 when tobacco plain packaging was introduced.

“The so-called data being spun by the tobacco industry to claim that plain packaging has not worked is plain wrong,” Olver said in a statement.

“If we used tobacco industry claims to guide health policy, life expectancy in Australia would be much lower than it is today.”

The Cancer Council said the tobacco industry’s misinformation campaign was “aimed at undermining the introduction of plain packaging in the UK”.

“In a country of 63 million people, plain packaging would be a major blow to the tobacco industry’s profits,” Prof Olver said.

So, did tobacco sales rise or fall?

The Australian’s original article refers to research by the industry monitor Info View which claims a rise in the market share of cheaper cigarettes from 32 per cent to 37 per cent last year.  This claim, they said, is backed up by retailers, consumer marketers and the industry, as cigarette maker Philip Morris said its information showed no drop in demand.

The newspaper also quoted British American Tobacco Australia spokesman Scott McIntyre who stated that the plain packaging had none to very little effect on industry sales.

“From 2008 to 2012, smoking incidence, or the number of people smoking, was declining at an average rate of 3.3 per cent a year,” he said, citing Roy Morgan data.

“Since plain packaging was introduced, that decline rate slowed to 1.4 per cent,” added McIntyre.

The question really is though, did the use of tobacco products increase as The Australian claimed, or did it decrease as other analysts say?

It seems that tobacco sales have increased slightly, BUT:

Population growth was not considered in The Australian‘s report

The Guardian agreed that the figures used in the article on 6 June 2014 reflected a slight increase in the tobacco product sales but their analyst warned that The Australian had deliberately pulled the figures out of context and failed to include the normal year on year growth in consumer goods sales related to normal population growth.

The Australian omitted some facts

Media Watch said in their report on the matter that: “As the tobacco industry admits – but The Australian did not – the rise in wholesale cigarette sales figures is almost certainly explained by retailers trying to beat a rise in tobacco tax last December.”

And what does The Australian have to say, then?

The Australian’s editor Clive Mathieson told Media Watch he was “entirely comfortable” with the story.

He also insisted Christian Kerr is not an IPA member and defended his report, saying: “…we are right to question the efficacy of a public health measure that credible data suggests is doing little more than encouraging smokers to switch from more expensive brands to cheaper brands.”

So, whose lead will the world follow – Australia’s or The Australian‘s?

Jonathan Lieberman, lawyer and director of McCabe Centre for Law and Cancer in Melbourne said about complaints currently with the World Trade Organisation that Australia’s laws breach world trade agreements, including trademark rights, told Michelle Innis of the New York Times: “Australia’s move was globally significant, and a WTO decision in Australia’s favour would be devastating for the tobacco industry.”

In the New York Times article, Innis also states: “It seems likely other countries will follow Australia’s lead. In Britain, an independent review found that standardized packaging would serve to reduce the rate of children taking up smoking.”

She added that: “Ireland’s health minister, James Reilly, said that the government had approved a draft bill on plain packaging, and in New Zealand, a bill has been presented to Parliament, where the associate health minister, Tariana Turia, said plain packaging takes away the last means of promoting tobacco as a desirable product.”

All the major car manufacturers are now launching pure battery electric models and many governments and municipalities are legislating and...