Thai ambassador called in for talks over coup

The Australian government has expressed concerns about the military coup in Thailand through the Thai embassy in Canberra and with Thai authorities in Bangkok. 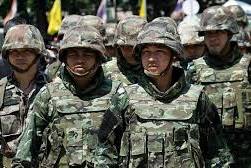 The Australian government has expressed grave concerns about the Thailand military coup in meetings with officials in Bangkok and Canberra.

Thailand’s ambassador to Australia was called in by the federal government in Canberra on Friday afternoon.

Ms Bishop has expressed grave concerns about developments in Thailand, describing the situation on the ground as volatile.

She has also urged Australian travellers to exercise caution and pay close attention to their security.

Thailand’s army chief has ordered demonstrators on both sides of the kingdom’s bitter political divide off the streets after seven months of rallies in the capital.

The development came after the military imposed martial law this week and follows the dismissal this month of prime minister Yingluck Shinawatra.