Nowhere has been spared from the start of Victoria's record-breaking heatwave, with some residents enduring 46C. 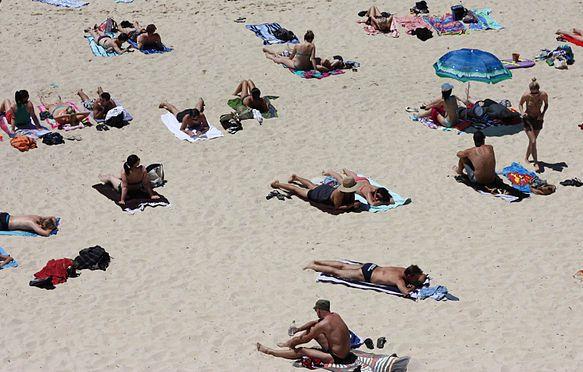 SOME Victorians sweltered through 46-degree heat, others sweated with no power and grassfires burned at the start of a record-breaking heatwave.

Several towns in the state’s northwest endured temperatures of 46C on Tuesday while mercury in other towns hit 45C.

No one was spared from the heat, with temperatures reaching 40C in all nine of the Bureau of Meteorology’s forecast districts.

Melbourne, which reached 42.8C, is set to endure four consecutive days of temperatures above 40C after the bureau upgraded Wednesday’s forecast to 41C.

It will be the first time the city has endured such a heatwave since 1908, when there was a five-day streak above 40C, Bureau of Meteorology duty forecaster Stuart Coombs said.

“It would go down as the second-longest run of 40s since records started in 1835 in Melbourne,” he said.

“There will be very little relief during the overnight periods and that’s going to make this a very arduous spell of weather for people to get through.”

Some people had trouble getting through Tuesday’s heat as electricity company SP AusNet went ahead with bushfire mitigation works in some areas, while postponing non-essential maintenance.

SP AusNet said it began work earlier than originally stated so customers would be reconnected before temperatures hit their peak in the afternoon.

“We’ve increased resources for these jobs and brought forward start times, predominantly starting as early as 7am, to reconnect power before the hottest period of the day,” a spokesperson said.

Emily Healy, a resident of Thoona, one of the affected towns, said they were warned about the interruption two weeks ago, but were caught out when the power was cut early.

“We’ve got no power, which means we’ve got no water – our water is reliant on electricity pump,” she said.

Several fires flared on Tuesday afternoon with some firefighters treated for heat stress.

Paramedics dealt with 35 cases of heat exhaustion or heat stroke across the state by late afternoon.

There were five cases of children locked in cars.

Ambulance Victoria operations manager Paul Holman said while some cases were accidental, others appeared to be deliberate.

“If you’re going to lock your children in cars, you may as well put a gun to their heads, it’s just so dangerous,” Mr Holman said.

Mr Holman said ambulance crews will struggle to cope with the influx of heat-related patients during the heatwave despite all available staff being on duty.

“We will be stretched, there’s no two ways about it,” Mr Holman said.

While the top international tennis players endure the heat at the Australian Open, the first horse race at Caulfield on Wednesday will start at 11am with the last race at 2.45pm in an attempt by Racing Victoria to avoid the predicted high temperatures. -AAP