Sydney train racism video incident just one of many more

A video showing shocking racial slurs filmed on a Sydney train this month and uploaded to YouTube has had over 395,000 views prompting more than 1,300 comments. Unfortunately it is not an isolated incident in Australia. 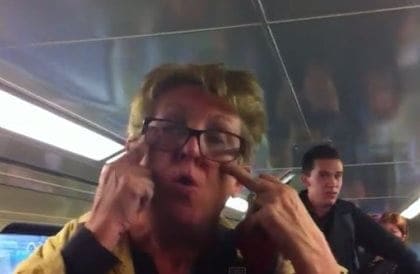 A women, who verbally abused fellow commuters on a Sydney train had no idea that a video made of her behaviour would be upload to YouTube and would create a massive stir.

She also had no idea that based on the evidence the video supplied police would charge her for her abusive behaviour.

But is 55-year-old Sue Wilkins, aka Karen Bailey, just one case in many depicting the shocking truth about racial intolerance in Australia?

More than a quarter of Australians were born overseas.  Australia is a land that considers itself a multicultural success story.

“Racism in general will always be part of any society. It has always been the human problem, ” said Rami El Sayed, former president of the Islamic Council in Victoria.

Such is the impact of social media that something that might have otherwise gone unaddressed had not only resulted in the women being criminally charged of socially unacceptable behaviour.

The women took to making offensive gestures and derogatory remarks calling a women of Asian descent a “gook”.  The  abuse seems to have started over the women’s dissatisfaction at not being offered a seat on the train by already seated children.

Her verbal assault was not contained to the women and she soon was also attacking a man she assumed was her first victim’s boyfriend.

“Look at this bogan here,” she says, using an Australian slang term similar to “white trash”. “He can only get a gook, he can’t even get a regular girlfriend. It’s so sad.”

Comments on the YouTube video are mostly the expression of shock and anger over the women’s behaviour.  Some have also apologized for her behaviour while a minority have defended the women saying they feel the same as she does.

In an interview with the Australian website NineMSN, Wilkins said she had a “really, really rotten day” and apologised for what she had done, saying she was “disgusted” at her behaviour. “No-one deserves to be spoken to like that,” she said.

But this is unfortunately not an isolated case and an easy Google search delivers many more similar cases in Australia.

In 2012 an angry bus rider can be seen in a video taunting a group of people believed to be visitors to Australia.

“Do you f—ing speak English?” the Caucasian man can be heard saying to what is believed to be a group of Japanese tourists.

While in April 2013 a woman who is allegedly an employee of Victoria’s Department of Justice was filmed hurling racist abuse at a woman of Asian origin on a Melbourne train.

The incident on a city bus had seen the young tourist told to “speak English or die, m*****f***er” and then threatened with having her breasts cut off.

“When you see someone really out of control, letting fly with all those prejudices and hatreds, it definitely is depressing,” said El Sayed.