Struth! British experts claim Australian slang is about to cark it

Linguistic experts believe Britons are turning up their noses at typical Australian slang like barbies, tinnies and sunnies. 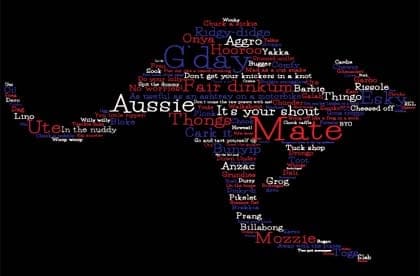 Apparently if you refer to your barbecue as a barbie and you have sunnies perched on your nose you are about as unfashionable as mum jeans and big perms.

Fewer Aussie youngsters are coming up with uniquely descriptive Australian words and phrases, opting to adopt new words from abroad instead, claims Tony Thorne, linguist at Kings College in London and author of the dictionary of contemporary slang.

Dr Thorne said that Australian slang is a rich mixture of the languages of the original British, Scottish and Irish settlers in Australia.

“Those people [settlers in Australia] weren’t hampered by the upper-class cultures of the UK,” said Dr Thorne.

“They were much more free to play with language, creating nicknames for local things, in a way that buttoned-up Brits in those days weren’t able to do.”

Interestingly Australia’s convict past also played a role with slang, even today; still being popular with prisoners and those who want to keep their conversations private, added Thorne.

“There was certainly a huge shift in attitude towards Australian English in the UK as a result of Neighbours,” said John Hajek, a professor in linguistics at Melbourne University.

“It exposed the British to a much wider variety of Australian accents and terminology. “Rack off” [Get lost]. “Daggy” [uncool].”

But in Australia today Americanisms are being used more and more and the Australian slang is suffering as Aussies become more cosmopolitan and even more formal, say linguists.

But the term ‘selfie’ — meaning a photograph of you, by you — is considered to have Australian origins and is one of the most widely used words in today’s pop culture the world over.