Stranded by stranger in Outback – Brit tells of harrowing ordeal

A British national, only known as Natalie, told reporters of her terrifying ordeal as she was driven into the Outback by a mysterious unnamed Australian and ‘left for dead’ in the same place where the Wolf Creek horror movie was filmed. 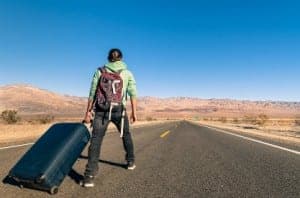 The young English backpacker known as Natalie and her boyfriend were in a group of foreign travellers who were promised work on a cattle ranch by a mysterious stranger.

Two days of travelling into the Outback on dusty roads culminated in the couple being deserted in the middle of nowhere near the site where the Wolf Creek horror movie was shot.

Natalie and her boyfriend met the man, she refers to as The Cowboy, at a backpackers’ lodge in Kununurra, Western Australian where he promised them, and a group of other backpackers, work on a cattle ranch that he said he owned.

“He looked like an Outback Australian and seemed like a normal guy,” said Natalie, describing the man in the cowboy hat, sunglasses and jeans with the two knives on his belt that he said he used to castrate cattle.

The whole ordeal was reminiscent of the Australian movie based on the actual story of the serial murders by Ivan Milat.  Milat murdered seven backpackers, including British women Joanne Walters and Carole Clarke.

After hours in the man’s car the pair had no idea where they were and became increasingly concerned for their safety.  They were eventually dumped by the side of a desolate road.

Both were, fortunately, unharmed but it raises the point of how vulnerable trusting travellers can be and how quickly a situation could turn badly.

Natalie’s story reveals how easy it is for unsuspecting tourists to take the word of a stranger in Australia’s vast outback – and, in the case of some, meet a terrible end.

“We didn’t know where on earth we were,” she said. “He literally led us on a wild goose chase for two days.”

While Natalie and her boyfriend travelled with the man in his car, other backpackers followed in their own vehicles.

When they reached the farm, they came to realize that their companion did not own it after all.  Yet they travelled with him to the small community of Fitzroy Crossing where told them all to drive ahead towards Margaret River.

This would be the last time they saw the man.