A man walking around Australia in a Stormtrooper outfit to raise money for charity, has been saved from a deadly snake bite by his armour. Not that long ago, on a road far, far away, 277 days into Scott Loxley’s 15,000 km charity trek across Australia, he was walking down the Bruce Highway between Yalboroo and Calen in Queensland when a deadly brown snake lunged at him and bit him.

Fortunately, the Force appears to be strong with Loxley who has been wearing a Star Wars stormtrooper outfit for his lap of Australia, and the cranky snake was not able to penetrate it.

He described the incident in a video blog posted to his Facebook page:

“I’m walking up the hill and I see a snake on the side of the road and I think oh here’s another dead snake… Turns out he wasn’t dead, big old king brown. They love the cane fields up here, and he’s lunged at me and bit me. But the good news is, he bit me in the shin, the armour actually protected me and stopped the bite. I could feel the teeth on the plastic scraping but the armour actually stopped something, so all the people who rag on the old stormtroopers… it stopped the snakebite and probably saved my life today. So yeah today’s a good day and I’m pretty happy,” he said. 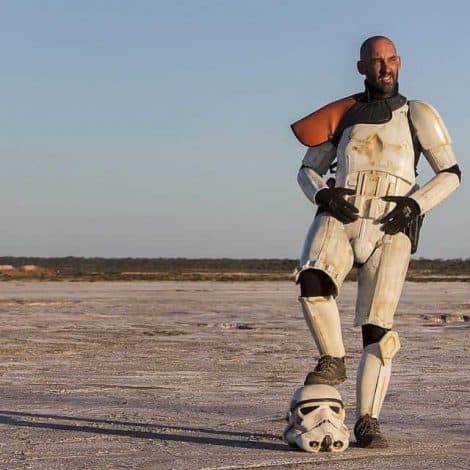 These are the road-kill you’ve been looking for

Apparently though the evil galactic Empire appears to neglect supplying its crack troops with enough rations. So Loxley has had to make do, eating snakes on his journey as well as lizards, bats and kangaroos. He explains how he catches them and make sure they don’t just taste like Sith.

“Normally of an evening they gravitate towards the road because the road retains its heat. I catch them by standing on them and holding their head, then I keep them alive by cable-tying them to a stick because they taste better when they’re fresh.”

However he was not about to catch this one for his next meal.

“That’s the first time today a snake actually bit me and got away with it. Yeah, couldn’t catch him… he was pretty aggressive and took off through the grass. I wasn’t about to go after him,” he said on his Facebook post.

The former soldier and military policeman walks 50 to 75km each day in his stormtrooper suit. His epic journey across the Australian Outback started in September last year in Melbourne and will finish again there in June this year.

He pushes a little trolley to keep his essentials in and uses pieces of truck tyres as re-treads for his shoes.

When asked if he is a Star Wars nerd he replied:

“The stormtrooper is an awesome advertising device. No matter where I go, everyone knows who he is.”

Loxley’s charity walk is raising money for the the Monash Children’s Hospital in Melbourne. He still needs to raise approximately $60 000 to get to his goal of $100 000. For full details about his mission and to make a donation, visit NewMonashChildrensHospital.everydayhero.com/au/stormingaroundaustralia