Queensland police have apologised to a man after questioning him over a t-shirt featuring the insignia of a fictitious TV bikie gang. 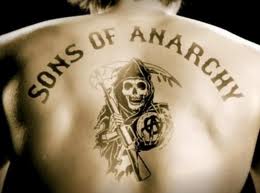 TWO police officers have been left red-faced after confusing a man’s Sons of Anarchy t-shirt with a real bikie gang’s patch in Queensland.

Police saw the man’s shirt, showing the insignia of the fictitious bikie gang in the popular US TV drama, during a protest at Emerald, where state cabinet is meeting.

Two officers walked over and began talking to him about it but it soon dawned on them that he was just a fan of the TV show, and not a hardened bikie criminal.

After awkward laughter, the officers apologised and left him alone.

Queensland’s Police Commissioner Ian Stewart has said officers should quit the service if they don’t want to be part of the bikie crackdown.

“If people aren’t prepared to do that, to step up when the going gets tough, then they really do need to consider another career,” the police commissioner has told ABC radio. – AAP