Photos: Snake eating a crocodile in Australia caught on camera by amazed onlooker. 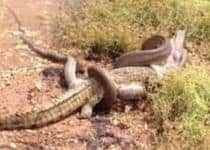 A snake has eaten a crocodile following a ‘gripping’ duel in front of a shocked, camera wielding Australian mum.

The huge snake took on the freshwater crocodile at Lake Moondarra in north west Queensland. The battle was captured on film by Mount Isa mum Tiffany Corlis.

After being alerted to the face-off by some nearby canoeists, Corlis says she put her brekkie to one side to grab her camera and get as close as she dared to the duelling animals to take the photos. By the time she arrived at the scene, the python had already overcome the still struggling 1m long croc, having coiled itself around the fellow reptile to complete the strangulation before swallowing its victim whole.

“(The crocodile) was fighting at the start, so it was trying to keep its head out of water and survive,” she told ABC North West Queensland Radio on Monday.

“But as the morning sort of progressed, you could tell that both of them were getting a little weaker.

“Finally, the croc sort of gave in and the snake had uncoiled for a little while and had a brief break and then actually started to consume the crocodile.” Ms Corlis said it was an amazing natural event to witness.

“It was just unbelievable,” she said. “We were sort of thinking that the snake had bitten off a little more than it could chew.

“But it did. It actually ate the crocodile!”

“When you actually looked at the snake, you could actually see the crocodile’s ridges, legs and everything inside its belly,” Ms Corlis said.