ANZAC DAY | Pilgrims camped overnight to attend the Gallipoli dawn service, which heard that while the Anzacs were ordinary men they did extraordinary things in 1915. 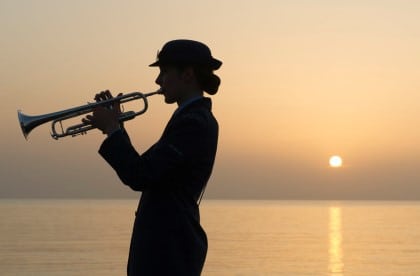 A smaller-than-expected crowd at Gallipoli for the Anzac Day dawn service has been reminded that reverential silence on the often eerily quiet Turkish peninsula is a tribute to the diggers who died in 1915.

Just 4400 mostly Australian and New Zealand pilgrims turned out this year ahead of the 2015 centenary commemorations which will see 10,500 people crammed on to North Beach.

Veterans’ Affairs Minister Michael Ronaldson on Friday said the soldiers who mistakenly landed at Anzac Cove 99 years ago were, by their own admission, ordinary men.

“They did not seek glory, nor did they want their actions to be glorified – for it was they who quickly came to know the true horror of war,” the minister said as the sun rose over the Gallipoli cliffs.

“That these ordinary men, however, did extraordinary things is beyond doubt.”

Senator Ronaldson said the Anzacs left a vanquished fighting force but “were victorious in helping forge the identity of our two new nations”.

“As the dawn of this new day breaks over the peninsula our tribute to the spirit of Anzac is a reverential silence,” he said.

Some 8700 Australians died during the eight-month campaign alongside 2700 New Zealanders.

The modern Turkish nation, too, was built partly on the back of Mustafa Kemal Ataturk’s success as a commander at Gallipoli. He went on to become the republic’s first president in 1923.

The 22-year-old comes from a military family – her father did tours of duty in East Timor and Iraq while her grandfather fought in World War II.

Ms Cooper, from the Gold Coast, told AAP she was representing them both at Gallipoli.

“It’s really mind-blowing to be here,” she said.

“Anzac Day is our biggest day of the year. It’s a really big thing in our family.”

Ms Cooper considered applying for the centenary in 2015 but decided the ballot was too risky.

“Coming this year was something we could actually make happen.”

Organisers saw this year’s service as a dress rehearsal for 2015.

But while the crowd will be much bigger next year, it will also be more manageable.

Authorities know exactly who’s coming because the event is ticketed.

Further, the pilgrims will be older on average because 1600 passes were set aside for direct descendants and veterans.

Australian authorities think it’s likely Prince Charles will attend the centenary service in Gallipoli although his spokeswoman has told AAP it is “too early to say”.

Prince William this week revealed he was looking forward to “taking part in next year’s Gallipoli centenary” along with wife Kate and brother Prince Harry.

That led to speculation they’d be at North Beach but a palace spokesman has clarified they could attend any number of Anzac ceremonies anywhere in the world.