The Australian Conservation Foundation gave Labor’s policy a qualified tick, describing it as “a serious policy response to the existential threat of global warming that recognises pollution must be cut across all industry sectors.” 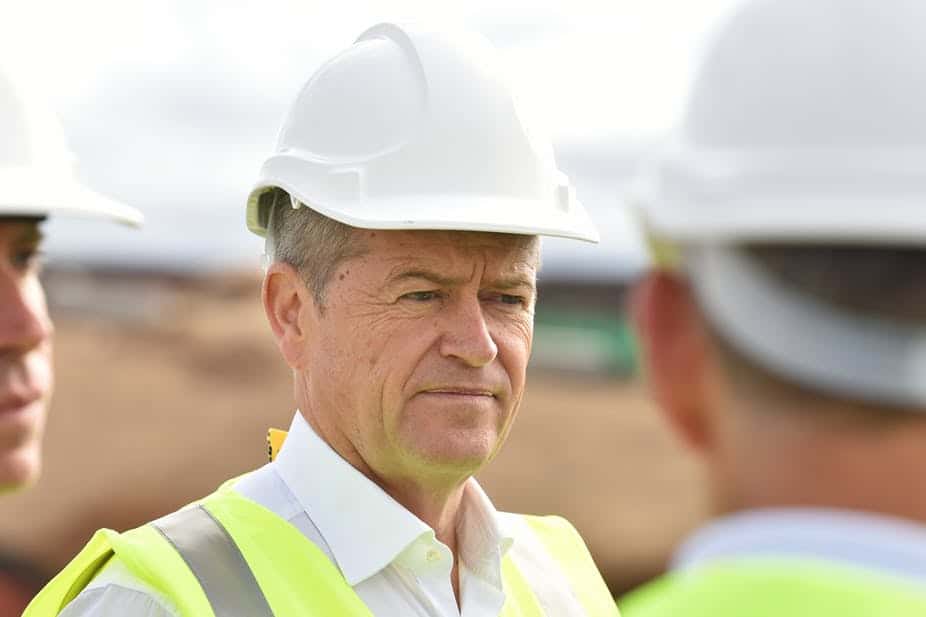 A Shorten government would add about 100 high polluters to those subject to an emissions cap, and drastically slash the present cap’s level, under the opposition’s climate policy released on Monday.

Labor would aim for a new threshold under a revamp of the existing safeguards mechanism of 25,000 tonnes of direct carbon dioxide pollution annually, which would be phased in after consultation with industry.

This would be a major reduction from the current cap of 100,000 tonnes. About 140 to 160 polluters come under the existing cap.

The safeguards mechanism was established by the Coalition government to cap pollution for the biggest polluters by setting limits or “baselines” for facilities covered. But Labor says it has been ineffective.

The climate change policy covers industry, transport and agriculture, with the proposed measures for the electricity sector, including an in-principle commitment to a national energy guarantee (NEG) and subsidies for batteries, already announced.

The agriculture sector would not be covered by the expanded safeguards policy.

The government’s emissions reduction fund – recently allocated a further A$2 billion over a decade and renamed – would be scrapped if Labor wins the May election.

The climate policy is the third of three key policy announcements the opposition wanted to make before the election is called, likely next weekend. The others were the wages policy and the announcement of the start date – January 1 – for the proposed crackdown on negative gearing.

The opposition has committed itself to a 45% economy-wide reduction in emissions relative to 2005 levels by 2030, compared with the government’s commitment to a reduction of 26-28%.

Labor’s policy confirms that it would not use Australia’s credits from the expiring Kyoto Protocol to help meet its Paris target, saying this course is “fake action on climate change”. Bill Shorten said on Sunday: “It’s only the Australian Liberal Party and the Ukraine proposing to use these carryover credits that I am aware of.”

Labor says it would “work in partnership with business to help bring down pollution.”

“Labor’s approach isn’t about punishing polluters. It’s about partnering with industry to find real, practical solutions to cut pollution, in a way that protects and grows industry and jobs.”

“There will be no carbon tax, carbon pricing mechanism, or government revenue,” Labor says.

“Rather, Labor will reduce pollution from the biggest industrial polluters by extending the existing pollution cap implemented by Malcolm Turnbull.”

“Pollution caps will be reduced over time and Labor will make it easier for businesses to meet these caps by allowing for industrial and international offsets.”

The expanded scheme’s new threshold would capture an estimated 250 of the biggest industrial polluters – 0.01% of all businesses.

Businesses would be able to earn credits for “overachievement” – reducing pollution below their baselines. They could sell these credits or use them to meet their future cap.

“Tailored” treatment would be provided to emissions-intensive trade-exposed industries (EITEs) such as steel, aluminium and cement. There would be a A$300 million Strategic Industries Reserve Fund “to support these industries in finding solutions to cut pollution and remain competitive”.

A Shorten government would consult with industry and experts on baselines for individual entities and the timing of reduction.

“Currently, a facility that emits more than its baseline must offset excess emissions by purchasing offsets, primarily from the land sector. But currently businesses cannot access international offsets, or offsets from the electricity sector.

“Labor will make it easier for covered businesses to meet any offset obligations, not only by allowing for the creation and sale of offsets if emissions fall below baselines, but also through the purchase of international offsets and potentially offsets from the electricity sector.

“We will also boost offset supply through revitalising the Carbon Farming Initiative (CFI) – including reforms to strengthen the integrity of the CFI, and increasing land and other sector abatement opportunities.

“This will include exploring the establishment of ‘premium’ land sector credits to provide substantial environmental, biodiversity and other co-benefits, establishing a Carbon Assessment Standard to boost the bankability of offset projects, and re-vitalising offset methodology research and development with an additional A$40 million in funding over four years.

On transport – which accounts for nearly 20% of Australia’s emissions – Labor says Australia is now last among western countries for electric vehicle uptake.

“Setting a national target will deliver more affordable electric vehicles into the Australian market and drive the switch to electric vehicles, reducing their cost, creating thousands of jobs and cutting pollution.”

Businesses would get an upfront tax deduction to buy electric vehicles, as part of the ALP’s announced Australian Investment Guarantee.

One aspect of moving quickly to government electric vehicle fleets would be that it would develop a secondhand market, Labor says.

“Labor will also work with industry to introduce vehicle emissions standards, to save Australian motorists hundreds of dollars each year at the bowser while driving down pollution on our roads.

“Australia is now one of the only developed nations without vehicle emissions standards in place. As a result, motorists will pay as much as A$500 each year more at the bowser than they should be, as well as seeing pollution on our roads skyrocket.

“Labor will consult on the timeline and coverage of vehicle emission standards to ensure consumers are made significantly better off, and aim to phase-in standards of 105g CO₂/km for light vehicles, which is consistent with Climate Change Authority advice.”

These standards would be in line with those in the United States but less stringent than those in the European Union.

“These standards will be applied to car retailers to meet average emissions standards, rather than imposing blanket mandatory standards on manufacturers.

The government has reacted predictably to the Labor climate plan, branding it a “new tax”, ahead of what will be a major Coalition scare campaign in the election.

Scott Morrison said the opposition leader “does not have a plan, he just has another tax.

“What we’ve got here is a ‘re-Rudd’ of a failed policy that costs jobs, that costs businesses, that will cost Australians at least $9,000 a year, with the reckless targets that Bill Shorten will make law.”

On electric cars, Morrison said Shorten needed to explain how in 10 years he would take them from 0.2% of the market to 50% – because if he didn’t achieve his “reckless target […] he has to come back and get that money off you”.

Energy Minister Angus Taylor said the Shorten policy “would be a wrecking ball in the economy.

The Business Council of Australia welcomed the further details Labor had provided but said there were unanswered questions including ‘what mechanism will drive and manage the transition to lower-emissions generation in the electricity sector?’

“It remains unclear how abatement will be delivered in the electricity sector and how the various announcements made today will contribute to an economy-wide emissions reduction target,” the BCA said.

It said it had strongly supported the National Energy Guarantee (NEG) and called on the ALP, if elected, “to commit to working with the states and territories to implement the scheme as a credible, market-based mechanism to drive abatement and investment in the electricity sector.”

The Labor party has supported in principle a NEG – the plan the Coalition dumped because of an internal split over it.

The Australian Conservation Foundation gave Labor’s policy a qualified tick, describing it as “a serious policy response to the existential threat of global warming that recognises pollution must be cut across all industry sectors.”

“Labor’s climate change plan does address many of the important challenges Australia has in transforming into a zero-pollution economy,” the ACF said.

TOP IMAGE: A Shorten government would consult with industry and experts on baselines for individual entities and the timing of reduction. (James Ross/AAP/The Conversation)