Former union boss Bill Shorten will stand for the Labor leadership but he could still face a challenge from Anthony Albanese. 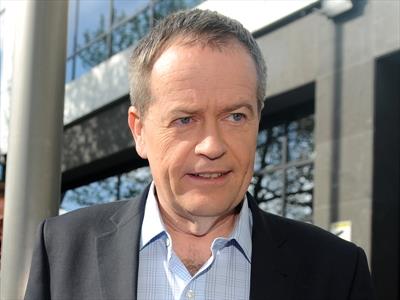 LABOR frontbencher Bill Shorten is set to announce he will stand for the party leadership, as a grassroots movement builds for Anthony Albanese to put his hand up.

Mr Shorten is expected to hold a media conference in Melbourne on Wednesday to say he wants to lead Labor in opposition.

But he’ll have to wait until Friday’s ALP caucus meeting in Canberra to be formally nominated.

Mr Albanese is currently the deputy leader to Kevin Rudd – who will step aside on Friday – and is considering his options.

Former trade minister Richard Marles earlier urged Mr Shorten, Mr Albanese and any other MP interested in the leadership role to put up their hand before the caucus meeting.

“This is a big decision for whoever decides to do it,” Mr Marles told Sky News.

“But I do think we need to have a sense of who’s putting their hands up by the time that we meet on Friday.”

A group calling itself Anthony Albanese For Labor Leader is demanding a rank-and-file ballot under new rules.

The leadership would be put to a vote weighted 50 per cent caucus members and 50 per cent ordinary party members.

Mr Shorten is expected to get the backing of caucus members from the Right in Queensland, NSW and Victoria.

Mr Albanese, who hails from the Left, is a popular figure in the caucus and is likely to have strong grassroots support.

“If the majority of people vote for bad policy, then they simply need to see that experiment fulfilled,” South Australian MP Nick Champion told ABC radio on Wednesday.

Labor should block the bills in the lower house and abstain in the Senate, he said.

“In effect, I think the Liberal Party want to hang themselves,” Mr Champion said.

“Well, we should give them as much rope as they need.”

Liberal MP Kelly O’Dwyer, who could move into a senior role in the Abbott government, welcomed Mr Champion’s comments.

“Finally, we’re hearing somebody on the Labor party side actually say `We shouldn’t be so arrogant as to dismiss the mandate that’s been given to the coalition at this election’,” she said. – AAP