Anthony Albanese and Bill Shorten have begun their leadership pitch to Labor members voting in a historic ballot. 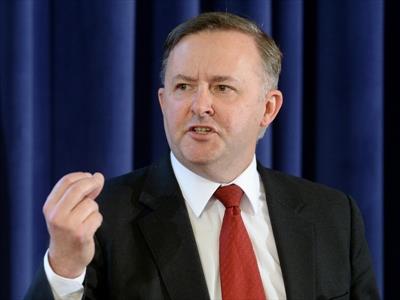 A claim by Federal Labor leadership aspirant Bill Shorten that the majority of the ALP caucus is behind him has failed to spook supporters of fellow contender Anthony Albanese.

Mr Shorten said on Tuesday he was encouraged by expressions of support from grassroots members and the caucus, but that didn’t stop Labor frontbencher Penny Wong throwing her support behind Mr Albanese for leader.

Mr Shorten and Mr Albanese have both nominated for Labor’s inaugural ballot of caucus and ordinary ALP members to elect the new federal parliamentary leader in opposition.

The result will be announced on 13 October, after a postal ballot of Labor’s estimated 40,000 members and an 10 October caucus meeting.

“I’ve got a majority of caucus members to sign my nomination,” Mr Shorten said on a visit to Melbourne’s Western Autistic School on Tuesday.

It is understood the Right faction powerbroker can count on about 54 per cent of the caucus vote, but the grassroots membership skews to the Left and is likely to favour Mr Albanese.

Mr Albanese, the outgoing deputy prime minister, is embarking on a three-city tour over the next three days.

The tour was scheduled to kick off on Tuesday night, with former minister and ACTU boss Greg Combet endorsing Mr Albanese at a Trades Hall forum in Sydney.

He’d also been supportive of more women getting into parliament and the ministry, she said.

Acting Labor leader Chris Bowen said he would not endorse either contender but would attend campaign events if both aspirants were present.

Mr Shorten said he and Mr Albanese had agreed to a “civil debate about ideas, not personalities”.

The pair also agreed that the loser of the ballot would still get a senior role in opposition.

Asked whether he and Mr Albanese had policy differences, Mr Shorten said their values were “quite similar”.

But he added that issues surrounding services for people with disabilities must be kept at the centre of the political stage, and that Labor must still keep the Abbott government accountable during the leadership contest.

Mr Albanese has launched a website, Albo for Leader, pitching him as the “son of a single mum who grew up in council housing in Camperdown”.

“I have seen first-hand why we must fight for Labor policies – and I’ve fought for them my whole life,” he writes on the site.