Australia has most fatal shark attacks in the world

More fatal shark attacks occur in Australia than in any other part of the world and 89% of them are on men. 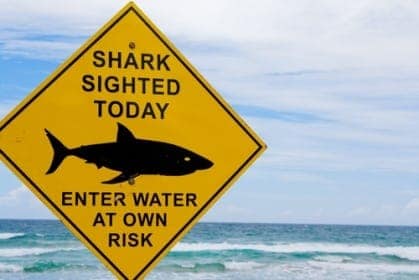 Australia reports the most fatal shark attacks in the world and if you are man, you are nine times more likely than a woman to be a victim.

A recent study by Australian scientists found that 89% of all shark attack fatalities are men, making them 9 times more likely to succumb to the deadly bite of shark, than the fairer sex.

Australian scientists are mystified as to why more men than women seem to be victim of the deadly attacks.  The study also indicates that in 84% of all unprovoked attacks the targets are men.

The study by Bond University in Queensland and published in the international magazine Coastal Management was authored by professor Daryl McPhee who told the Telegraph that he was so surprised by the results he had to double check the information.

Professor McPhee conceded that, “Potentially men spend more time in the water, and are more risk-prone.

This study forms part of a comprehensive international study on shark attacks and the number of fatalities due to shark attacks, which revealed a world-wide 300% increase in unprovoked bites between 1981 and 2011.

“The United States has by far the highest number of recorded bites but also the lowest percentage of fatalities, at just 3.6 per cent,” Prof McPhee said, suggesting a higher rate of reporting coupled with the prevalence of smaller sharks might be responsible.

Prof McPhee said that Australians’ love of water could be responsible for the country’s record-setting figures, saying that Australians’, “Obvious love and affinity with the water and the high level of usage undoubtedly plays a part.

It is also believed that as Australian waters are home to the larger and more aggressive shark species, attacks are more likely.  Typically bull, tiger and great white sharks are more likely to attack. The most attacks recorded were by great whites – not only in Australia, but also globally.

Contributing to the prevalence of these predators is the availability of food sources such as seals and certain whale species which are commonly found in the waters around the Australian coast.

An increased population of natural shark prey such as humpback whales and New Zealand fur seals in the waters near Australia was also likely a factor.

Professor McPhee told the Telegraph that some attacks were provoked, that not just innocent bathers and surfers fell victim to shark attacks, saying, “People patting sharks on the head, making them angry, putting their hand in the shark’s mouth to get a fishing hook out. Jumping on sharks and trying to ride them. There are provoked shark attacks that should win Darwin Awards.