Shane Warne and Liz Hurley reportedly back together

Shane Warne has been seen unloading his luggage at Liz Hurley's London residence, according to reports

by Bongani Mtlhavani
in News 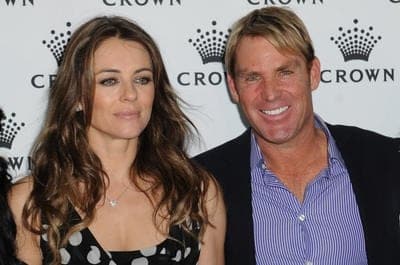 Shane Warne may be back as a couple with actress Elizabeth Hurley.

According to UK’s Daily Mail, the 44-year-old  former international cricketer, widely regarded as one of the greatest bowlers in the history of the game, was seen unloading his luggage at Hurley’s London residence and even beamed at onlookers who snapped pictures of the pair together.

Warne and Hurley had split late last year following a much publicised – and Tweeted) relationship.  However, Warne had hinted at a reunion with his former fiance on a radio show last week. “I’m just sitting on the fence on that one,” Warne had told Radio KIIS 106.5 when asked about Liz Hurley. “But we’ll see how things unfold over the next few months… I’ll inform you soon,” Warne said.

The pair both have kids from previous marriages. They were believed to be close till reports of a split came as a shock in their notorious f romance. The rumour mill went in to high gear with speculations ranging from his former wife Simone driving a wedge between the couple to Warnie’s refusal to set a wedding date with Hurley.

“I did not split up with EH (Elizabeth Hurley) because of my ex wife, secret phone or that I didn’t set a wedding date!” Warne subsequently clarified. “ALSO FTR (for the record) & I know it’s nobody’s business, I’m not in a relationship, smitten by anyone or seeing anyone, all absolute rubbish & made up lies.”

Shane Warne and Liz Hurley requested privacy after their split, but if the reports of a reunion are true we can be sure that the spotlight will be back on, brighter than ever.

IMAGE: English model Liz Hurley (left) and former cricketer Shane Warne pose for photoraphs at the launch of the Shane Warne Foundation Ambassador Program at Club 23 in Melbourne, back in November, just before their split. The pair are reportedly now reportedly back together. (AAP Image/Julian Smith)