Sexing up politics with the Australian Sex Party 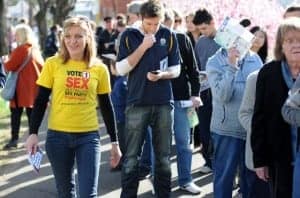 Fiona Patten knows that the name of her political party can be a double-edged sword. After all, naming your organisation the Australian Sex Party is sure to raise a few eyebrows — particularly in the largely conservative arena of Australian politics. That raised eyebrow is exactly what Ms Patten has been counting on: she knows that to make it as a viable minor party, you have to stand out.

Ms Patten told Australian Times: “No doubt some people look no further than our name and miss our policies but others would never have heard of us if it hadn’t been for our name. Small parties have a very hard time getting noticed, our name certainly helped us there. Many comment that we are the most honestly named party. I mean we really should be the Liberal Party.”

It only takes a glance at the policies of the Australian Sex Party to see that Ms Patten is right: the socially progressive organisation was established on a platform of libertarianism that conforms far more to the definition of ‘liberal’ than the right-wing party bearing the name. With policies on issues ranging from euthanasia and censorship to abortion and gay rights, Ms Patten is quick to assure voters that the Australian Sex Party is far from a single-issue group.

Ms Patten said: “People forget that every time you fill in a government form you are asked about your ‘sex’. Sex is everywhere and extremely important to the way society runs. Most people who have a problem with the name are only interpreting it as the ‘sex act’, which says more about them than us. We’re a civil liberties party that embraces gender and reproductive rights, eroticism and anti-censorship.”

Ms Patten, a former sex worker, founded the Australian Sex Party in 2009 in an effort to prevent the implementation of a government-run ISP-level internet filter, which would have banned Australians from visiting websites that had been “refused classification” by the Australian Communications and Media Authority. She claims that the failure of the Greens to oppose the measure had forced her to create a political party that would truly stand for libertarian values.

Ms Patten told Australian Times: “The catalyst was the internet filter. While the Greens were against the filter, the censorship of adult erotica was a bridge too far for them and we were left without a party that was genuinely upholding civil liberties and free speech across the spectrum. I had been working as an advocate for a range of issues that were mainly sexuality or censorship based.

“Despite ample evidence that Australians were becoming more relaxed about sexuality and more opposed to government censorship, our governments were becoming more and more conservative. Conservative church groups were incredibly over represented in the body politic. In fact, in the early days, we did consider becoming a religion rather than a political party.”

The Australian Sex Party have rapidly grown in support since 2009, with a strong showing in the 2010 federal election seeing the party achieve 2.04 per cent of the national Senate vote. This figure, which is higher than the Australian Greens polled in their first electoral showing, has bolstered Ms Patten’s confidence that her party may see itself represented in parliament after September’s federal election.

Ms Patten said: “A lot of people — millions – buy X rated videos and DVDs and are sick of being caught up in a criminal act by buying them. I think a lot of these people voted for us. Similarly, a lot of recreational drug users are sick of being cast as criminal and perverts when all they want to do is have a quite joint on the weekend. A lot of these people are voting for us now.

“And then there are young politically disengaged and isolated people in regional areas who are fed up with politicians and want to caste a protest vote and voting for a party called the ‘Sex Party’ is one way of doing that. Australians are pretty pissed off with all of the major parties. They do not reflect 21st century Australia and we do. For example gay marriage, they can’t believe that New Zealand and England have beaten us to this.”

Ms Patten told Australian Times that a prolonged period of conservative government in Australia had watered down the country’s sense of fun and freedom. She said that the Australian Sex Party would focus on legalising both euthanasia and marijuana should they control the balance of power in the federal upper house.

Ms Patten said: “Australia is a leading Nanny state in the western world now with similar morality laws to Arabic and third world countries. Australians returning from living overseas are just amazed at how over regulated this country has become. In Victoria the state government has introduced legislation to make it illegal to swear in public!”

Ms Patten recently made news in Australia after protesting that increased candidate fees were an attempt to freeze out minor party representatives in the lead-up to the September poll. The Australian Sex Party will run candidates in both the Senate and the House of Representatives at this year’s federal election.