Cardinal Pell apologises to inquiry for Catholic cover-up of child sex abuse and says church will pay compensation but not huge US sums. 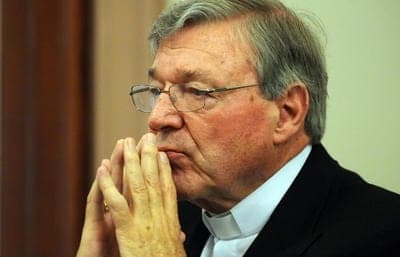 AUSTRALIA’S most senior Catholic, Cardinal George Pell, has admitted the fear of scandal led to cover-up in the church.

He said former Melbourne archbishop Sir Frank Little was involved in a cover-up and a former Ballarat archbishop destroyed documents.

He denied he personally covered up offending.

“No. Never,” he told a Victorian parliamentary inquiry into child abuse on Monday.

He agreed under questioning that the fear of scandal led to a cover-up.

“The primary motivation would have been to respect the reputation of the church.

“There was a fear of scandal.”

Cardinal Pell, who is the Archbishop of Sydney and a former archbishop of Melbourne, has apologised for the abuse committed by clergy.

“That is the basis for everything which I’ll say now.”

Cardinal Pell said the church had dealt with child sex abuse “imperfectly” and had not understood the damage being done to victims.

“I would agree that we’ve been slow to address the anguish of the victims and dealt with it very imperfectly,” he told the inquiry.

“I think a big factor in this was not simply to defend the name of the church.

“Many in the church did not understand just what damage was being done to the victims. We understand that better now.”

Cardinal Pell said the sodomy of children was always regarded as totally reprehensible.

“If we’d been gossips, which we weren’t … we would have realised earlier just how widespread this business was,” Cardinal Pell said.

He admitted lives had been ruined as a result of the cover-ups.

He agreed the systemic cover-up had allowed paedophile priests to prey on children.

“I would have to say there is significant truth in that,” Cardinal Pell said.

He did not believe there had been a culture of abuse.

“I was certainly unaware of it.

“I don’t think many, if any, persons in the leadership of the Catholic Church knew what a horrendous widespread mess we were sitting on.”

Cardinal Pell agreed that placing paedophiles above the law and moving them to other parishes resulted in more heinous crimes being committed.

“There’s no doubt about it that lives have been blighted.

“There’s no about it that these crimes have contributed to too many suicides.”

Cardinal Pell said former Melbourne archbishop the late Sir Frank Little did cover up offences in one instance and spoke to nobody about the offending.

“Yes, Archbishop Little did cover up but he inherited a situation where there were no protocols and no procedures, and for some strange reason he never spoke to anybody about it,” he said.

Cardinal Pell said he had discovered “in the last few weeks” that former Ballarat Bishop Ronald Mulkearns had destroyed documents.

The inquiry has heard that Bishop Mulkearns was aware of child abuse accusations against paedophile priest Gerald Ridsdale but simply moved him to a different parish.

“His actions were followed by disastrous consequences,” Cardinal Pell said.

But he said both men would never have intended to aid the offenders.

“Our assets are not hidden in trusts,” he said.

“We have always met our obligations for compensation.”

He agreed the church’s assets in Australia would “certainly be very considerable”.

Cardinal Pell said the church is ready to pay victims whatever the law commands.

Australian compensation – a maximum of $75,000 – was low compared to the US but compared quite favourably with the vast majority of the world.

“We will pay whatever the law recommends is appropriate compensation.

“Many of the victims aren’t particularly interested in money. The more important thing is due process, justice and help with getting on with their lives.

Cardinal Pell insisted a reduction in the number of offences suggested that the Catholic environment was very safe.

“I pray, and I think it’s reasonable to say and I hope, that the worst is behind us,” he said.

“We have implemented a massive cultural change.

“The crime is totally regrettable. The damage is enormous.”

By Genevieve Gannon with AAP