The boys from Stoke Travel are well versed in the art of the European party festival in Haro. Here, WADE GRAVY talks us through his favourite — the Batalla de Vino.

by Wade Gravy
in News 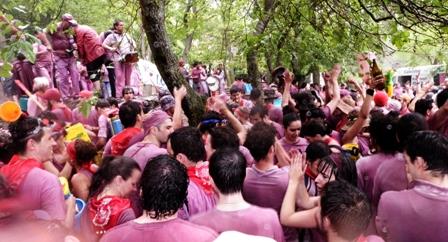 WHEN you’ve been “round these parts” for a while you get a little desensitised to the zaniness of the Spanish street festival. The first time you roll into La Tomatina, for example, the whole concept of the thing just clean blows your mind! I mean, they do what? With tomatoes? In the village streets? That many? And then it happens and it surpasses your expectations and you become some kind of rambling, ranting, raving, babbling lunatic for the days after talking about that time you threw the tomato, haha, and how someone grabbed you and licked the pulp out of your ears, and, oh man, it was so CRAZY!

And then you do it again, and it’s still crazy, but you’re like, well, we’ve sort of done this before. And you have a good time, and you rave about it forever after, but it’s not quite like the first time. Y’know?

Fourth time, well, you might sit this one out. Enjoy the ambience, but just sit out the fight part. ‘Cause, y’know, yawn.

Same goes for the Running of the Bulls. You’ll never do anything as good as your first, second and third year there. Fourth? Anyone know what the surf is like? Fifth you turn vegan and so on.

But there is one festival that we go to that bucks out of that trend. It’s a festival so FUN that we all look forward to it year in, year out. Some of us even have our calendars set to “dates until” this festival, scratching the passing days as scores on our tepee walls. It’s partially because not many tourists go there yet, partially because the locals are just so welcoming (the two or intrinsically linked, btw). It’s also because the concept is just so, WOW! Hottdamn it’s a good concept.

Heard about it? Oriental whispers in hostel common areas, an obscene message scratched in the back of a bathroom stall, or your crazy cousin may have appropriated your attention at a backyard BBQ and chewed your ear off about this festival, man. Oh man. This festival.

The long and the short of it goes down in a village, in La Rioja — the premier red wine producing region, in my opinion, in the world. There’s a night where we party so hard in the village itself. Locals will grab us and ask what we’re doing there, and we’ll say, “the same thing as you, hombre”, and they’ll love us and we’ll party even harder by the minuto. Some of us will party all night, others will go back to our camp and have short, beautiful, sleeps. When the sun’s on the up we’ll make our way up a mountain. Half way up the mountain is a vineyard and all the way up is a chapel with the best views a chapel has ever had. If you get there early enough you go up the chapel and see the village folk performing rituals with wine. You look over the plains and go, “wow, man, I’m in Spain. I’m the luckiest dude/babe/chick/legend in the whole world. Pinch me! Just pinch me!”

Then you make your way down to the vineyard in the middle of the mountain and the wine fight begins. Wine, red wine, is produced by the gallon and liberally thrown on all and sundry. We’ll all pickle ourselves and each other in the wine that the villagers deem is unworthy for their fine palates. The wine fight is, quite literally, a fight with wine. A batalla de vino, in Haro.

It is so much fun that it never gets stale. Like the wines we drown each other in it is both wonderful the first time you enjoy it and fantastic every time you return. If we could attend a wine fight a week we would. Dionysius willing, we’ll see you there.

The Wine Fight of Haro is on 28 June, and we camp and party in the town centre the night before. Our buses run from San Sebastian and Barcelona. Book now, because it will fill up.www.stoketravel.com.

Tags: Running of the BullsSpainStoke Travel