"I'm not saying there aren't a lot of dangerous people out there, I'm saying a lot of those people are in government," says Russell Brand, in his video blog about the Sydney siege. 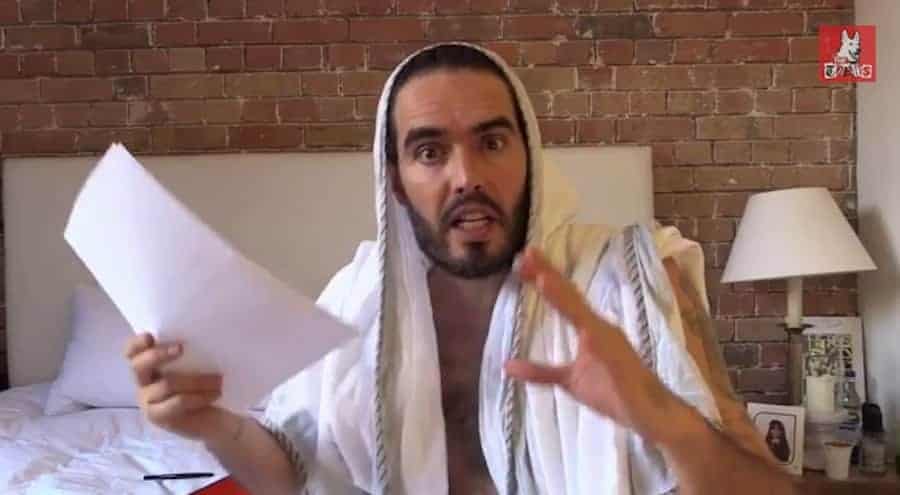 Russell Brand is once again adding his two cents to the political issue of the day by criticising local and international coverage of the Sydney siege, live from his bed.

“Question all information when you receive it, you might not even trust me, look at me I’ve got a blanket over me head,” says comedian Russell Brand in his latest bulletin on Trew News: News You Can Trust.

Brand rips into Rupert Murdoch for praising his Sydney publication on Twitter for featuring the “bloody outcome” on the front page.

AUST gets wake-call with Sydney terror. Only Daily Telegraph caught the bloody outcome at 2.00 am. Congrats.

He then continues to critique reactions to the siege of other Murdoch owned publications such as The Sun, The Daily Telegraph and The Wall Street Journal. “All of those newspapers are probably owned by one bloke whose actual opinion was ‘congrats’,” says Brand.

Speaking of Man Haron Monis, the gunman who took 17 people hostage, Brand says: “This guy is clearly a mentally ill criminal with a long history of mental illness, criminal behaviour and lots of evidence of instability”.

He continues. “By us labelling him a terrorist as opposed to a dangerous mentally ill – not that all mentally ill people are dangerous, I’m mentally ill – and by allowing him to set the agenda of ‘I’m doing this on behalf of Islam’, it gives a certain grandeur to nihilistic and violent actions but what’s more interesting that the actions of a mentally ill person is the response of the political establishment.”

Brand cheekily responds to snippets from Prime Minister Tony Abbot’s speech at a press conference. Mr Abbot spoke of the siege inside the Lindt café saying: “There is nothing more Australian than dropping in at a local cafe for a morning coffee”. In response, Brand screws ups his nose and says: “There’s loads of things more Australian. Having a coffee in the morning? You do that, I think, everywhere”.

Another snippet shows Mr Abbot saying: “These events demonstrate that even a country as free, as open, as generous and as safe as ours,” but Brand cuts him off by saying, “These are some objective facts about Australia – it’s free and it’s safe and it’s open – just as long as you’re doing roughly what they tell you to do”.

In sounding off the Australian government’s new anti-terror laws, Brand says: “Terrorism is continually used as a tool to control a domestic population. I’m not saying there aren’t a lot of dangerous people out there, I’m saying a lot of those people are in government.”

He concludes with the following:

“It’s really important in this time of division and fear that we embrace one another. Us, the normal people in the middle, embrace one another. Forget the extremists are either end of the social scale, whether they are motivated by religion or money or desire for power, and us, the ordinary people that want to make connections, have a right and a duty, in fact, to define the way we see reality.”