AUSTRALIAN ELECTION 13 | Prime Minister Kevin Rudd says Rupert Murdoch has made his anti-Labor stance clear and his News Corp papers are free to say what they will. 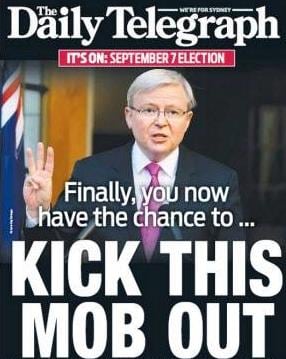 A DRAMATIC tabloid front page calling for Labor’s removal from office comes as no surprise to Prime Minister Kevin Rudd.

On day one of the federal election campaign, Sydney News Corp publication The Daily Telegraph led its Monday edition with a full-page photo of Mr Rudd and an editorial under the headline: “Kick this mob out”.

“We have a free press in this country so Mr Murdoch’s media is free to say what it will and of course we disagree with the proposition they put.”

Opposition Leader Tony Abbott denied the coalition had the support of News Corp.

“Over the years I’ve copped a fair bit of criticism from News Limited papers along with some support,” Mr Abbott told ABC radio.

He said other publications will “no doubt want to support the government”.

“I know that there are some people in the Labor party who are paranoid about criticism, who see conspiracies against them, but the fact is some media outlets will be for the coalition and some will be against,” he said.

“If some vested interests want to see Labor thrown out, you’ve got to ask yourself ‘why do they want that’?,” Mr Shorten told ABC TV.