AUSTRALIAN ELECTION 13 | Prime Minister Kevin Rudd says he wasn’t told he couldn’t use notes in the leaders’ debate although Tony Abbott says they weren’t worth reading. 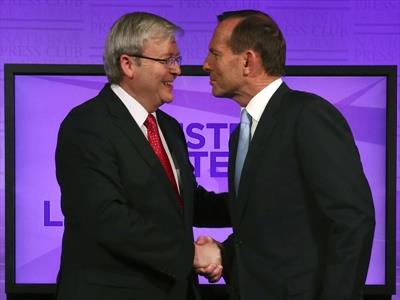 PRIME Minister Kevin Rudd insists he didn’t know he’d be breaking the rules by using notes in the leaders’ debate – and he’s done it before.

Opposition Leader Tony Abbott was told it was against the rules and thought it odd when his opponent arrived with a stack of notes and seemed to be reading from them at the open and close.

“My problem was not that Mr Rudd used notes but what he used wasn’t worth reading in the first place,” Mr Abbott told Fairfax radio in Melbourne.

Mr Rudd says he was not advised about the rule and had acted in good faith.

“If someone had said to me it was not proper to take notes along to a debate, then, sure, that’s fine. I was in receipt of no such advice,” Mr Rudd told reporters in Sydney on Monday.

Mr Rudd pointed out it would have been odd for him to go on a platform watched by millions thinking he could do something “on the sly”.

“You can’t. So I acted in good faith and everyone would accept that,” he said.

The debate rules signed off by both parties stated the leaders could have a pen and paper but “no other documentation or props.”

A spokeswoman for Mr Rudd on Sunday said there’d been no intention of not complying with the rules.

“We have always believed this rule is aimed at preventing the use of props,” the spokeswoman said.

Mr Rudd also used notes when he debated John Howard in 2007 and regularly uses them for media appearances.

The prime minister says that’s because he prefers to be as accurate as he can.

“There’s a limit to how much you can scribble down on the palm of your hand,” he said.

“There’s a limit to how many of Mr Abbott’s three-word slogans you can actually get there to remember them all.”

Mr Abbott was asked on Monday to promise the next debate would be less boring.

“I thought every minute was full of excitement,” he quipped.

He was in the minority.

OzTam says the most watched program on Sunday night was Seven News with 1.34 million viewers.

The Nine Network reported that Tony Abbott used notes in his debate against Julia Gillard in the last federal election campaign – when the debate rules were the same as on Sunday.

Mr Abbott has agreed to a debate in two people’s forums in coming weeks organised by Sky News.

Mr Rudd said he didn’t have the details but was open to a debate with Mr Abbott at any time.

“So long as you have proper scrutiny, which means having panels of journalists and the rest,” he said. – AAP