Prime Minister Kevin Rudd has quit the leadership of the Labor party after Saturday’s election defeat. 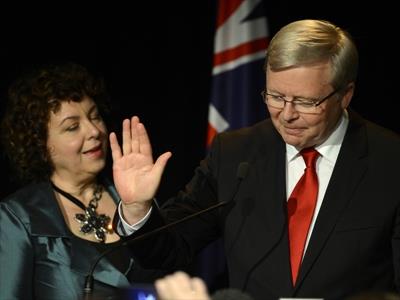 Prime Minister Kevin Rudd has quit the leadership of the Labor party after Saturday’s election defeat.

“There comes a time when you know that you’ve given it your all and the time for the party to further renew its leadership for the future,” he told his election night party at the Gabba in Brisbane.

He said the Australian people deserved a fresh start with Labor’s leadership.

“My responsibility has been to maintain Labor as a fighting force for the future so that we can unite behind the next leader of our party,” he said.

Mr Rudd said he had taken the decision with a “heavy heart”.

“I love the vision we have for Australia’s future and I love the hard work of translating that into policies that make our future.”

Mr Rudd said the time had come for renewal, including the application of a new rule under which the federal parliamentary leader is elected 50 per cent by the caucus and 50 per cent by a vote of grass-roots members.

“This is the beginning of the democratisation of our party,” he said.

The leadership issue is likely to be addressed at the next Labor caucus meeting, which could be held in Canberra on Thursday or as late as September 16.

Under the rules introduced just before the election, Labor has to put an interim federal leader in charge until a ballot of MPs and rank and file ALP members is held.

That is most likely to be deputy leader Anthony Albanese.

Nominations would be open for seven days and the ballot, which could take several weeks, is weighted 50 per cent caucus MPs and senators, and 50 per cent grass-roots members. – AAP