A potential third tilt at the Labor leadership for axed Prime Minister Kevin Rudd appears to have lost momentum, with suggestions that Mr Rudd’s plan to persuade senior government ministers to support his challenge has failed. 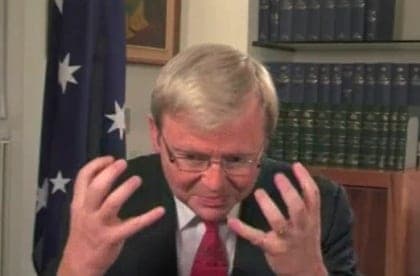 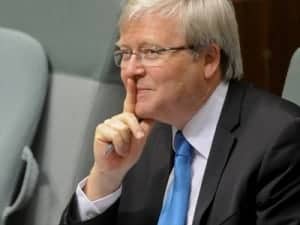 A potential third tilt at the Labor leadership for axed Prime Minister Kevin Rudd appears to have lost momentum, with suggestions that Mr Rudd’s plan to persuade senior government ministers to support his challenge has failed.

Fairfax Media have reported that frustrated Labor MPs have started putting pressure on Mr Rudd to formally challenge Prime Minister Julia Gillard for leadership of the party after indications that she would not willingly step down from her position. Political commentators had predicted that a change in the Labor leadership would likely occur this week as the 43rd Parliament comes to a close.

Mr Rudd missed an opportunity to canvas support for a potential leadership bid today after missing a Labor caucus meeting in order to attend the memorial service for Hazel Hawke, the former wife of long-serving ALP Prime Minister Bob Hawke. The possibility of a leadership challenge is also doubtful, given that Mr Rudd yesterday sought permission from the government whip to travel to China for a conference on Thursday.

For his leadership challenge to be successful, Mr Rudd would need to obtain majority support within the 102-member Labor caucus which voted to dump him as leader in mid-2010. Although most Labor MPs have reaffirmed their support for the current Prime Minister, the last week has seen a significant rise in the number of parliamentarians willing to imply support for Mr Rudd’s return to the leadership.

Labor senator and Rudd-supporter Mark Bishop went on record this week with his belief that the party should be led by whoever gave it the best chance of winning in September’s federal election. He hit out at Gillard-supporters Peter Garrett and Stephen Conroy, criticising their vow to resign from the frontbench if Mr Rudd returned to the leadership.

Senator Bishop said: “I’ve been somewhat disappointed by some of public commentary of my more senior colleagues in the last two or three days. You don’t have the option where I come from of saying ‘well, I like Jack, I don’t like Jill and I’ll only work under Jack’. So that’s been a disappointing sideshow that cabinet ministers have engaged in.”

Rudd’s supporters claim that they are still committed to the prospect that a senior delegation of minister’s could request that Ms Gillard step down as Labor leader, however government insiders suggest that the Rudd camp do not have a back-up plan in the event that this does not take place.