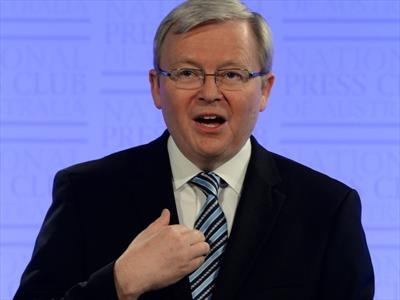 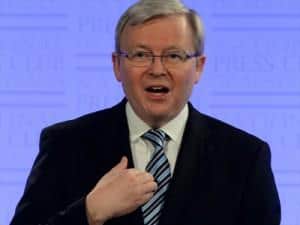 FORMER prime minister Kevin Rudd has been forced to deflect questions over whether he’s positioning himself for a tilt at the United Nations’ top job during a visit to London.

Mr Rudd has kept himself busy debating global affairs since quitting politics in the wake of Labor’s election defeat in September and on Monday night delivered a lecture on China’s impact on global relations.

The ex-PM played down his role as a statesman but said he would continue to engage in discussions concerning global politics on a broader scale “if that’s relevant or useful”.

However, he denied he was preparing for a push at becoming the successor to UN secretary-general Ban Ki-moon.

“You can’t go around and talk about things I’ve been talking about now for 30 years without a motivation being attached to it?” Mr Rudd told UK television’s Channel 4 when asked if he wanted the top job.

“I’m big supporter of the United Nations but I don’t think that position’s going to be headed Down Under.

“I see myself as a small player on very much a larger stage which is concerned about the future prosperity and stability of the world.”

In a wide-ranging speech delivered to an audience of around 200 for The International Institute for Strategic Studies in central London, Mr Rudd spoke about the rapid repositioning of global power towards China, describing the nation’s rise and its impact on international order as “the great challenge of our age”.

“I don’t have any specific mission provided to me by anybody else,” Mr Rudd said.

“I will just continue to lecture, to talk and to write in the great world of ideas such as the ones I was seeking to address (tonight), whether that is here, in the United States or in China or back home.”

Mr Rudd would not be drawn on domestic issues, refusing to comment on calls for him to face the coalition’s royal commission into his government’s botched roof insulation program.

“I have no intention of commenting on domestic politics,” the former Labor leader said.

He did admit, however, that the woman he toppled, Julia Gillard, was subjected to blatant sexism in the lead-up to her demise.

“There was extraordinary sexism towards Julia in that period,” Mr Rudd told Channel 4.

“This should be a simple non-start in the 21st century – particularly in our sophisticated democracies.”