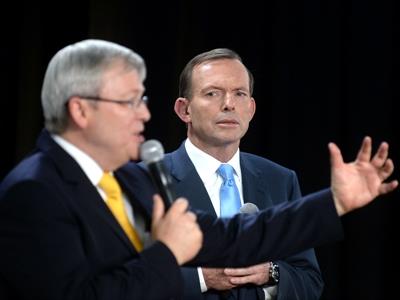 KEVIN Rudd and Tony Abbott had a frank exchange at the second leaders’ debate, as the prime minister turned up the heat on the costing of the coalition’s paid parental leave scheme.

The opposition leader was narrowly voted the winner by the 105-member audience of undecided voters – 37 to 35, with 33 still undecided – at Brisbane’s Broncos Leagues Club on Wednesday night.

But he caused a stir when Mr Rudd wouldn’t give up an attack on the coalition’s $5.5 billion a year plan to give working women six months paid parental leave capped at $75,000.

“Will this guy ever shut up?” said Mr Abbott, attracting laughter from the audience.

The Liberal leader later said Mr Rudd had deliberately set out to be feisty and confrontational, but admitted he too was a little “keyed up” before the people’s forum.

Mr Rudd used the debate to probe his opponent on plans to cut health funding and how the coalition would pay for the parental leave scheme.

Mr Abbott said the independent Parliamentary Budget Office (PBO) had signed off on the funding – which includes a 1.5 per cent levy on more than 3000 companies, the scrapping of Labor’s scheme and “consequential adjustments”.

Pushed for detail, Mr Abbott said “about a half” of the annual price tag would come from the business levy.

“So it will mean cuts for the other half, which is $2.5 billion worth of cuts to jobs, health and education,” Mr Rudd said. The PBO analysis hasn’t been publicly released.

The prime minister asked Mr Abbott whether he would commit to the $20 billion health and hospitals deal with the states.

“Of course there will not be cuts to the hospitals,” Mr Abbott said.

“The unscripted, negative, aggressive man who would be prime minister,” Senator Wong said.

Asked what his version of the Howard-era Work Choices industrial relations policy would be called, Mr Abbott revived his 2010 pledge that the hardline policy was “dead, buried and cremated”.

Mr Rudd said the coalition had yet to give a “convincing reply” to questions about the protection of penalty rates and overtime.

But Mr Abbott did commit the coalition to saying where it stood on Labor’s bank levy before the September 7 election.

While he didn’t like it, there was a “serious budgetary position” to consider.

Both leaders were asked about the low quality of candidates contesting the federal election.

Mr Rudd said there had been a problem with the “lowness of parliamentary standards”.

Mr Abbott admitted a couple of his own candidates had “not exactly covered themselves in glory so far in this campaign”.

“But I am confident that people can grow, develop and mature,” he said.

Mr Abbott said this forum had been more lively than the previous election debate.

Mr Rudd is expected to visit Geelong on Thursday to meet with car industry workers and talk about disability care.

Mr Abbott will start his day in Brisbane. – AAP