Rudd, Abbott have a debate draw

AUSTRALIAN ELECTION 13 | The prime minister and opposition leader have had a dead-heat in the first leaders’ debate of the election campaign. 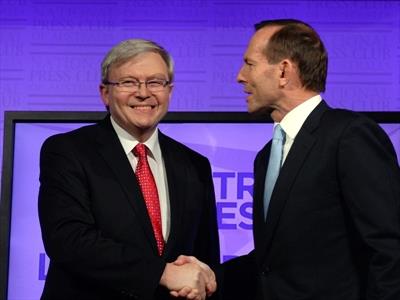 KEVIN Rudd may have had a narrow victory in the first leaders’ debate but the prime minister’s performance was marred by his use of notes, in clear breach of the rules.

Mr Rudd used the hour long event at the National Press Club to announce his Labor government would within 100 days of regaining office introduce to parliament a new bill to allow same-sex marriage.

“Folk out there want this to happen,” he said.

Mr Rudd urged the coalition to dump its decision not to allow MPs a conscience vote on the issue as “a mark of decency”.

Mr Abbott, whose gay sister Christine was in the audience said it was an important issue but the coalition’s immediate priority was living costs and jobs.

The prime minister caused a stir by referring to a large folder of notes while giving his introductory remarks and answering some questions.

The debate rules stated the leaders could have a pen and paper but “no other documentation”.

Before the debate, Mr Rudd referred on Twitter to briefing notes for the debate.

“I have lots of official briefs for the debate,” he tweeted.

After the debate, a spokeswoman for Mr Rudd said there was “absolutely no intention” to do anything other than comply with the rules and he was happy to debate Mr Abbott anytime without notes.

“The PM arrived at (the) lectern in full view of the audience and the panel,” she said.

“There were no objections raised at any time.

“We have always believed this rule is aimed at preventing the use of props.”

Mr Rudd opened the debate calling for a “fair go for all”.

“This election is about the future strength of our economy and how best to secure it,” he said.

Mr Abbott said it wasn’t about him or the prime minister but “you, the people of Australia”.

“We are a great country but we can’t afford another three years like the last six,” he said.

“Mr Rudd talks about a `new way’ – well if you want a new way, you’ve got to choose a new government.”

The leaders responded to questions from moderator and Sky News journalist David Speers and a panel of three journalists from News Corp Australia, the ABC and Fairfax Media.

Mr Abbott rejected claims he was being “evasive” over the coalition’s plans for changes to the GST.

“The GST doesn’t change under the coalition,” he said.

Mr Rudd wondered why the GST would be part of the coalition’s proposed first-term tax review if no changes were planned.

The prime minister also said that in a “perfect world” he would like to be able to cut company tax, as the coalition was proposing, but it was “not the right course of action at this time”.

“What Mr Abbott’s proposal does is remove two significant slices in revenue from the government, and, I fear, transfers that burden potentially to families in terms of any future changes to the goods and services tax,” he said.

Mr Abbott defended the coalition’s plan to remove the SchoolKids Bonus payment to parents to help with education costs if he won the election, saying it was a “cash splash with borrowed money”.

Both leaders declined to commit to boosting the current target for cutting carbon emissions, saying it would depend on future international action.

Mr Rudd concluded on his theme of a “new way” of politics, while Mr Abbott called on voters to give him a “clear majority” in order to deliver “real change”.