A week after first retiring to consider its verdict, the jury in Rolf Harris's child sex abuse trial has come back to the judge with questions. 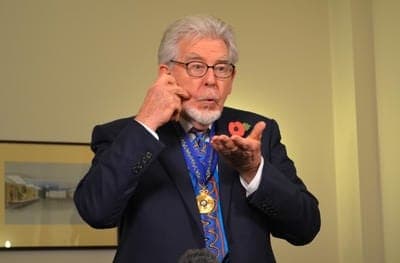 Jurors in the Rolf Harris trial have asked a series of questions of the judge as they continue deliberating in the complex child sex abuse case.

The jury passed a note to Justice Nigel Sweeney on Thursday, exactly one week after they first retired to consider verdicts in London.

“We would like some clarification,” the note began, before going on to query if they could discuss the legal directions they’d been given “as there seems some confusion”.

The note raised five points, including whether the jury was “to judge each count independently”.

Harris is charged with 12 counts of indecent assault against four girls in the UK between 1968 and 1986.

The Australian’s main accuser is a childhood friend of his daughter Bindi.

She claims Harris abused her from the age of 13 but he insists the pair had a 10-year consensual affair that started after she turned 18.

Jurors on Thursday asked: “Is it allowed to stereotype what the victim should have done prior to an alleged offence taking place in more than one count or using it against them?”

Justice Sweeney responded by reminding the six men and six women of the lengthy legal directions he’d given them both in court and in writing.

They could, if they decided to, consider evidence from other complainants or witnesses when deciding each indecent assault charge, he said.

The judge also reiterated there was no classic or typical response to abuse.

Justice Sweeney reminded jurors there was no stereotype for a sexual offence, a sex offender or a victim of sexual abuse.

At the time he said: “You must not feel under any pressure of time at all.”

So far the jury has been out for more almost 27 hours.

Harris, 84, is waiting for news at Southwark Crown Court supported by his wife, Alwen, Bindi and a small group of other family and friends.

Aside from the four main complainants another six women gave supporting evidence during the seven-week trial that Harris abused them in Australia, New Zealand and Malta between 1969 and 1991.

The star denies touching any of the women inappropriately.

Harris told the court in late May: “They are all making it up.”

Justice Sweeney has asked for unanimous verdicts at this stage.