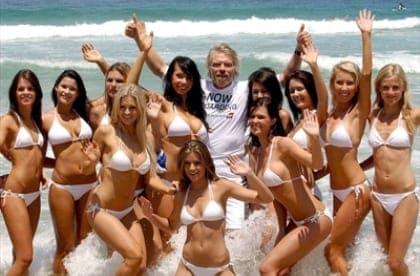 Sir Richard Branson says the West Australian government’s shark culling policy will backfire, driving away tourism rather than boosting it.

The British billionaire entrepreneur made the comment on breakfast radio as the state’s Fisheries department was deploying baited drum lines off Perth beaches, including Cottesloe, where a large rally against the program is planned for Saturday morning.

The WA government says a spike in often-fatal shark attacks has dented tourism and leisure-based businesses, with recreational diving operators reporting a greater than 90 per cent plunge in people learning to dive.

But Sir Richard, who fights China’s shark fin trade, says WA is getting a bad reputation internationally and tourists will be driven away.

“I’m sure one of the reasons he (Premier Colin Barnett) did it was because he was thinking it would encourage tourism. It’s going to do quite the reverse, I think,” Sir Richard told Fairfax radio on Friday.

“You’re advertising a problem that doesn’t exist in a major way and you’re deterring people from wanting to come to Perth and your beautiful countryside around it.

“All you’re going to achieve, I think, is to worry people unnecessarily.”

He said it was “very sad” such a bad example was being set to the rest of the world.