Clive Palmer says unless the government rethinks plans to scrap payments for children of dead or injured soldiers, he won't support the mining tax repeal. 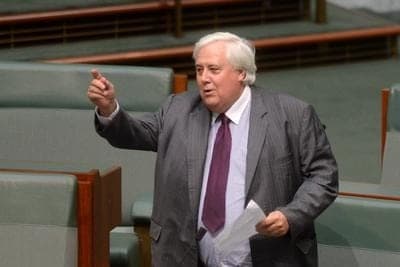 Clive Palmer has told the federal government his party won’t support the repeal of Labor’s controversial mining tax unless it drops plans to axe welfare payments for children of dead or severely injured soldiers.

About 1240 children of defence force personnel have been paid an income support bonus of $211 a year following the death or incapacity of a parent who has served overseas.

But the coalition has pledged to end the payments, which were part of the spending package funded by Labor’s mining tax.

With Labor and the Greens opposing the axing of the tax, the coalition has to wait until the Senate changeover in July before it has the numbers to go ahead with its changes.

But the Palmer United Party will be crucial to any vote in the Senate, and on Thursday Mr Palmer called for a rethink on their welfare proposal.

The multi-billionaire miner said his party backed repealing the mining tax but he was not “going to persecute young children because of it”.

“We think if a person’s given their life for Australia they should be sure the Australian government won’t attack their children after they’re gone,” Mr Palmer told ABC radio on Thursday.

“They’ll just have to take it out or they won’t have any change.”

Deputy Liberal leader Julie Bishop said blocking the mining tax repeal was against the interests of Western Australia, which goes to the polls next month in the Senate re-run.

“(Mr Palmer) of all people should know that the mining tax is bad for our economy, bad for Western Australia in particular,” Ms Bishop said.

“If the previous government had not trashed the budget, trashed the government’s financial position, then we wouldn’t be having this debate.”