Rescue of kayaker stalked by crocodile in WA ‘one of many’

Don MacLeod, the Australian man who saved Kiwi Ryan Blair from a six-metre crocodile that had stalked him for a fortnight on Western Australia's West Governor Island, has plenty of similar tales. 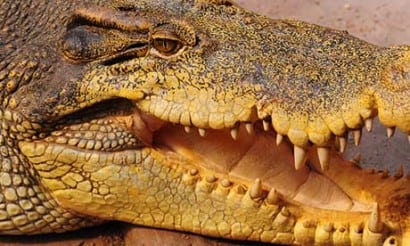 MOMENTS after ferrying a Kiwi kayaker who had been stalked by a giant crocodile on a remote Australian island to safety, local Don MacLeod went to the rescue of another hapless adventurer.

Mr MacLeod, a long-term camp dweller near the Drysdale River not far from the most northern tip of WA, was the saviour of Ryan Blair, who hit headlines this week for spending a fortnight on West Governor Island being terrorised by a six-metre croc.

The retired nature-lover spotted a light on the island as he sailed past on Saturday and ensured the shirtless and desperate tourist made it safely to Kalumburu.

But minutes after he was dropped off – and media got wind of the story – a more seasoned lone adventurer named Norm had a frightening encounter with another big crocodile and again, it was Mr MacLeod to the rescue.

“Just after I told the ABC lady about Ryan, a bloke pulled up and his boat had been chewed,” Mr MacLeod told AAP.

“He had a yacht, he’d pulled up that morning to get some water and that evening, he’s rowing back and one of the large ones that hangs around here just grabbed the boat by the keel and decided to punch holes in it.

“So we dragged it up on the bank and patched it up at my camp, and I took him across (to his yacht) in my dinghy.”

Norm, a fearless Queenslander who counts the Arctic among his travels, had been “in every nook and cranny from here to Broome” and had taken some great snaps of jumbo crocs along the way.

“He’s only got a little yacht. He’s also got a boogyboard sort of thing, so he sometimes tows that behind him and gets up in the fresh water and paddles up on that further upstream.”

He said the Kiwi had admitted he’d been foolish to get himself in his sticky situation – unable to paddle to the mainland because the colossal croc was always lurking nearby.

Without his saviour, he had three options: drowning, death by crocodile or dying of thirst.

“None of them were much good were they?” Mr Macleod said.

“But you know, he’s having a go, getting out there and doing something.

“I’ve done some awful silly things in front of crocodiles myself – had a few near misses getting up and down the Ord River, from Lake Argyle down to Lake Kununurra, all the way down to where the saltwater starts.

“I’ve dived on a big one in about 20 foot of water – landed right in the middle of his back.

“We were shooting a few big catfish.

“It was pretty funny.”

About six weeks ago, Mr MacLeod also came to the aid of a couple on holiday from running a pizza shop in Victoria’s Dandenong Ranges.

The girlfriend, a flame-haired Ukrainian named Genya, was bitten by a freshwater crocodile at a remote creek but it was luckily a small one, leaving her with wounds that only required disinfectant.

“I said to this bloke `when you’re over there, don’t go swimming in these creeks because there’s freshwater crocodiles there and they don’t know people – they’ve never seen a human – and they are very territorial even though they’re quite small, some of them’.

“He found the creek, jumped in, swam out.

“And his girlfriend – she was a bit cagey – she sat on the bank up to her shoulders in the water and next thing, this croc jumped out and grabbed her by the shoulder, gave her a bit of a shake and took off.”

It was only then that her partner said he’d been warned not to swim there, laughing.

“She sent me a Father’s Day card the other day, saying she’s eternally grateful.

“But she’s a tough lady.

“She walked about 30km back to the camp here and ended up cooking me a great big meal.”

Mr MacLeod – who has plenty more similar tales – says it’s not just tourists who get into trouble in the wild.