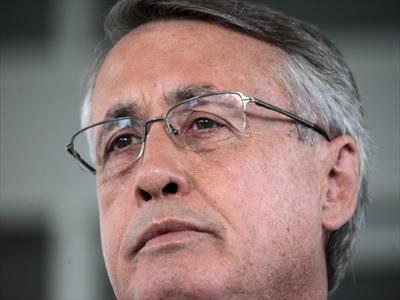 But Mr Turnbull, the former head of the Australian Republican Movement, also says the ground needs to be prepared to ensure a strong consensus in favour of constitutional change.

He’s suggested an “interactive plebiscite” that would make full use of the informative powers of the internet, which was not available when the last referendum on a republic was held in the 1990s.

“I am not suggesting we become a cyber republic,” he told reporters in Canberra on Monday.

“But I think that the cybersphere offers us a real potential for engagement.

“At the end of it, it will be interesting to see what people’s conclusions are.”

Mr Turnbull was speaking at the launch of a book of essays, Project Republic: Plans and Arguments for a New Australia, alongside Deputy Prime Minister and Treasurer Wayne Swan.

Mr Swan said a modern democracy like Australia should be comfortable with having a citizen as its head of state.

“But there’s another even more important reason why now is the right time to discuss the republic question – Australia’s vital place in this the Asian Century,” he added.

“With the economic and political balance now shifting to our part of the world, the idea of an Australian head of state who resides in Windsor Castle outside London seems very far-fetched.”

Mr Swan proposes a two-stage process to Australia becoming a republic – a plebiscite to determine the best model to choose a head of state and their powers followed by a constitutional referendum.

“Personally, I strongly believe we should kick-start that formal process sooner rather than later,” he said.

But other senior coalition figures, including Mr Turnbull’s leader Tony Abbott, dismissed the renewed calls to set Australia on the path to becoming a republic.

“As far as I’m concerned the only referendum that counts is the referendum on 14 September on a very bad government,” Mr Abbott, a monarchist, told reporters.

“You have to be in a particular kind of bubble – as Wayne Swan obviously is – if you think the public want a debate right now about the republic,” he told reporters.

“It is extraordinary that Labor is so out of touch with what working men and women want in Australia that he would think that was a high priority for any new government.” – AAP