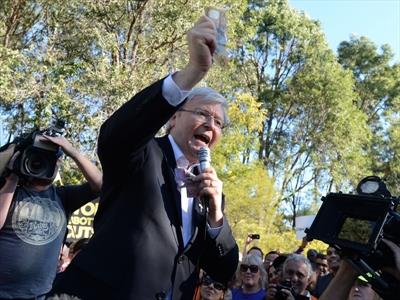 PRIME Minister Kevin Rudd says he shouldn’t be written off in this election despite another poll showing support for Labor falling.

“There are many things worth fighting for. This is a fight worth having,” he told Seven on Monday.

“If you look at my political past, it hasn’t alway been easy and I’ve been written off many many times before.”

The latest Newspoll shows Labor is heading for an election loss on 7 September, with Mr Rudd in a worse position now than when he was dumped as Labor leader in 2010, while Opposition Leader Tony Abbott’s popularity is climbing.

The Newspoll, conducted for The Australian on the weekend, shows Labor’s primary vote is just 34 per cent, compared to the coalition’s primary vote of 47 per cent.

On a two-party-preferred basis, Labor’s support stands at 46 per cent – a drop of two percentage points – while the coalition’s support has risen to 54 per cent.

“We are busy putting our campaign forward,” he told ABC Radio on Monday.

With Labor’s primary vote only fractionally higher than it was in the closing phases of Julia Gillard’s prime ministership, Finance Minister Penny Wong was asked if the party should have stuck with its original line-up.