In Australia's southern skies before sunset on Tuesday, a partial solar eclipse that occurs every 73 years will occur. 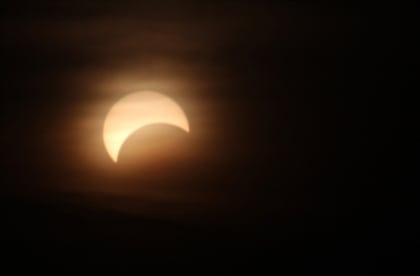 A rare eclipse that will make the sun look like a “super-fat banana” will appear in Australia’s southern skies.

A crescent sun, almost as rare as a Halley’s Comet, will be visible on Tuesday shortly before sunset in southern parts of Australia.

Queensland University of Technology astrophysicist Stephen Hughes says two-thirds of the sun will be covered in Melbourne, compared with half in Sydney.

“Melbourne will be quite a bit better than Sydney … a super-fat banana,” he told AAP on Monday.

Hobart viewers will see a thinner crescent while people in tropical Cairns will be lucky to glimpse a “tiny bite out of the sun”.

A full annular eclipse will be visible in Antarctica.

The phenomenon, known as a non-central annular solar eclipse, occurs every 73 years – Halley’s Comet appears every 75.

The eclipse will occur two weeks after a “blood moon” was visible, when the moon passed through the middle of a shadow cast by Earth.

This time the moon will be on the other side of the Earth and will pass right in front of the sun.

“Just by looking at it, it won’t look any different from a normal, partial eclipse,” Dr Hughes said.

Viewers are urged to avoid looking directly at the sun, and should either wear special eclipse glasses free of scratches or see the event at an observatory.