Jihadi recruitment video features a British national and another man believed to be a radical Australian. 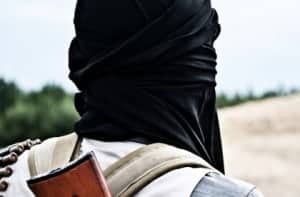 A terrorist propaganda video for ISAS, the organisation responsible for the current crisis in Iraq, features an Australian man flanked by Brit Nasser Muthana.

The 20-year old medical student from Cardiff is believed to be taking his gap year and is joined on the video by a man believed to be an Australian with extensive terrorism connections.

Zakaryah Raad, from Sydney, was found guilty of assualt in February 2014 when he and three others assaulted a city electrician saying they were punishing him under Islamic law for drug and alcohol use.

According to an ABC report, the video suggested that Zakaryah Raad died in scrimmage soon after the filming of the video.

Raad is, according to the ABC, a member of the Raad family from Melbourne.  Members of the family were tried with 12 other men for planning terrorist attacks in Australia, protesting Australian troops being sent to Afghanistan.

On Thursday Australian prime minister Tony Abbott stated, “We are redoubling our vigilance at our borders to try to ensure that jihadists do not gain access to our country, or are monitored if they have the right of access to this country.”

Julie Bishop, the foreign minister, said Australians fighting with militant groups would pose a danger if they return home and that a number of passports had been cancelled, on the advice of intelligence agencies.